A pair of duckbill pliers I acquired.  Interesting that they're stamped "Finished in the U.K."  "Langbeck" is German for "long nose."  In German, "Langbeck-Flachzange" are long-nose pliers. 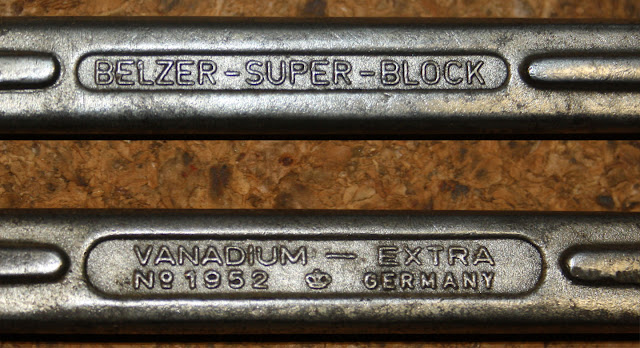 Belzer  was founded in 1884 by Robert Belzer.  In 1925, the firm was the first to produce tools of chrome-vanadium steel.  At one time, it made specialty tools for Volkswagen and other European cars.  (Someone has generously uploaded a 1967 catalogue.)

In 1975 Belzer merged with Dowidat of Wuppertal to form Germany's largest tool company:   "DWU Belzer Dowidat" ("DWU - Deutsche Werkzeug Union"). In 1988 it was bought by the Swedish toolmaker Bahco which discontinued the brand. Bahco Verktyg was then swallowed by Sandvik in 1991.  In 1999, Sanvik sold its saw and tool business to Snap-On Inc. of Kenosha, which had previously acquired the Spanish tool maker Herramientas Eurotools S.A.  The new company was renamed Bahco Group AB, but in 2005 the Swedish and Spanish companies were combined into SNA Europe, headquartered in Paris, France.  Bahco is the company's premium brand.
Posted by The Duke at 9:45 AM

I remember the Belzer truck pulling up to the shop, the only thing that made Snap-On truck seem cheap! They had all the best specialty tools though and at a Porsche specialty shop many were "must have" tools

I still have Belzer tools that I bought over 50 years ago! Treat them right and they will reciprocate!

There is a Belzer tool chest for sale over here, in a pretty bad condition with some modifications on it. I wanted to check if the painting, the handles or the badges are original, but no chance.


I had an old open wrench tool with brand name "ELITOOL" with Made in Philippines and this is where I got my attention with Belzer brand tools and found out that ELITOOL Philippines and BELZER Germany were business partners during early 70's .- Until now my open wrench is still working and really tough quality and found this brand in Singapore and Thailand this brand is being sell until now.."ELITOOL" by the way is a member of Elizalde Group of Companies owned by a Filipino.

I have a Belzer catalog from 1957 it also features Itma in the back of the catalog. If some of you are interested I could scan it all in and upload it somewhere for you all to see. I also have a ever growing collection of Belzer tools. I live in The Netherlands and am very lucky. There are a lot of belzer tools available on the second-hand market.

After a day of scanning i proudly present to you the catalog. You can view it using this link to my google drive.

Fabulous! Thank you very much!

I am just visiting Vienna for 3 days and by chance I found and I bought Belzer-Motor No 4006F adjustable wrench. In a very good condition, just for 5 EUR.I am so happy.
I am collecting 6in adjustable wrenches and it is a nice addition to my collection.