Above and below, a variety of Crescent tools in my shop, made when their factory was out of Jamestown, New York, between Buffalo and Cleveland on the south side of Lake Erie.  (Perhaps more famously, the town was the birthplace of Lucille Ball which has maintained the Lucille Ball Desi Amaz Museum since 1996.) 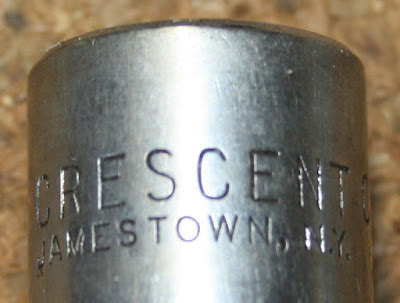 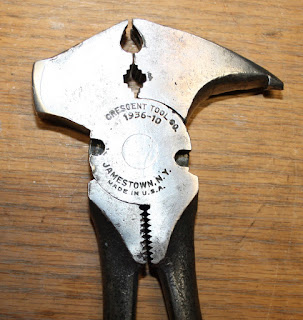 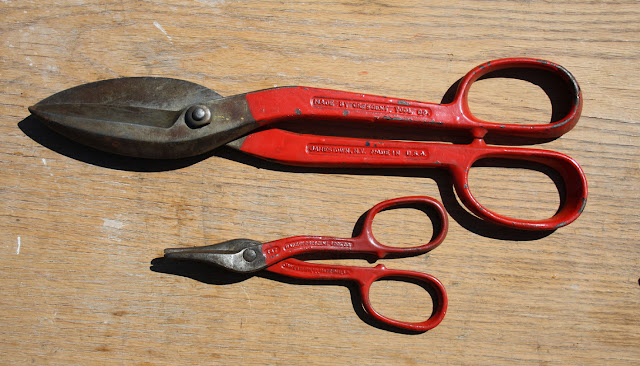 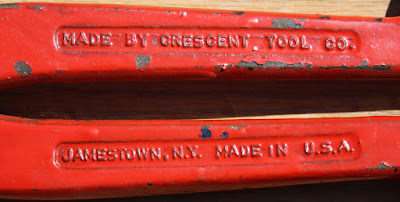 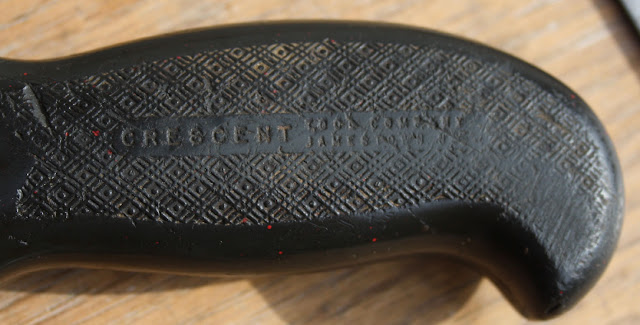 Below, what I think is probably a very early logo on, I think, a pair of nippers in my shop.  Note that the letter "C" is represented as a crescent, as also shown in the 1924 ad below.

Crescent was originally known for their adjustable wrenches. Below, the ones in my shop ranging from enormous to palm-sized. The largest one at top I found at a yard sale and I think I paid about $3 for it.  I told the seller I needed for watch repair work.  He'd bought it new for some staggering sum.  For me, it's since come in handy on many occasions. 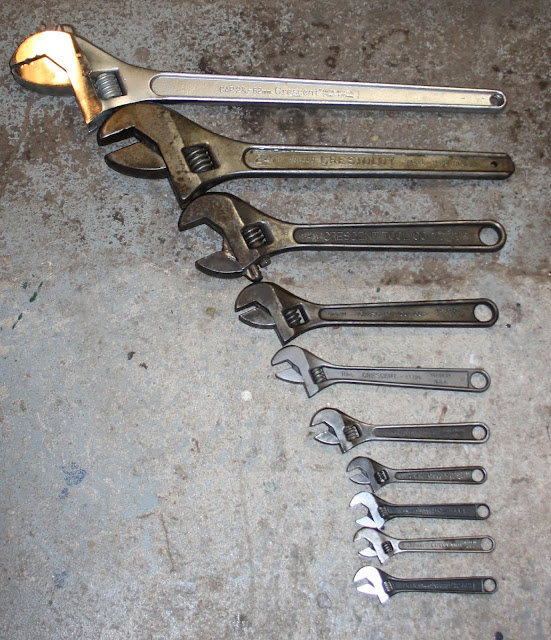 Below, some of the company's products back in the day. The double-end adjustable wrenches are particularly intriguing, although I suspect that they would be awkward in use. 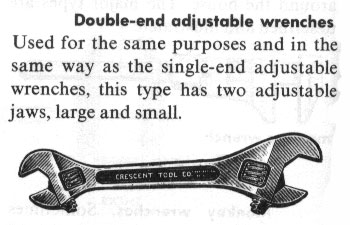 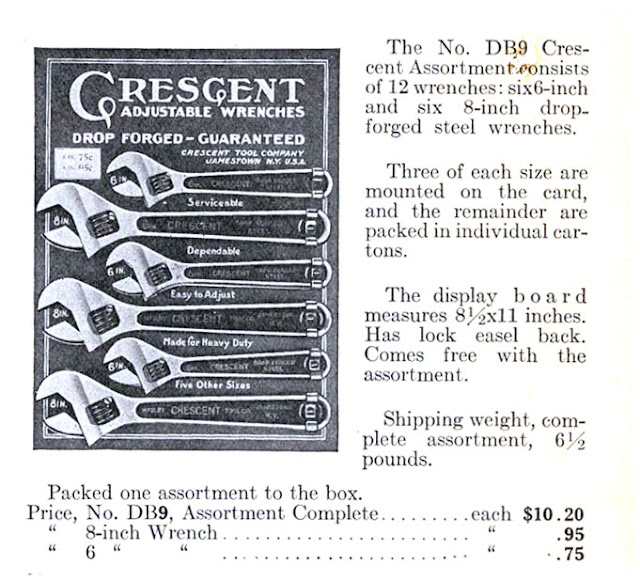 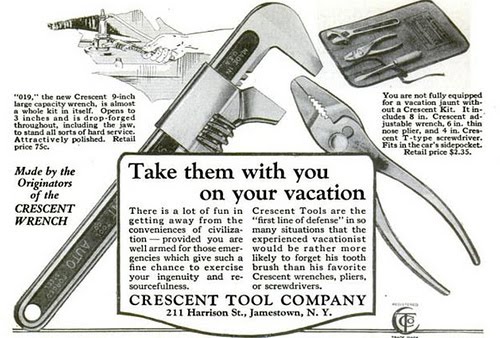 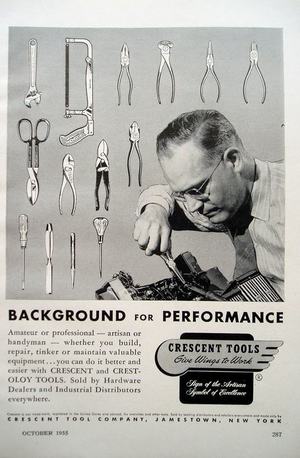 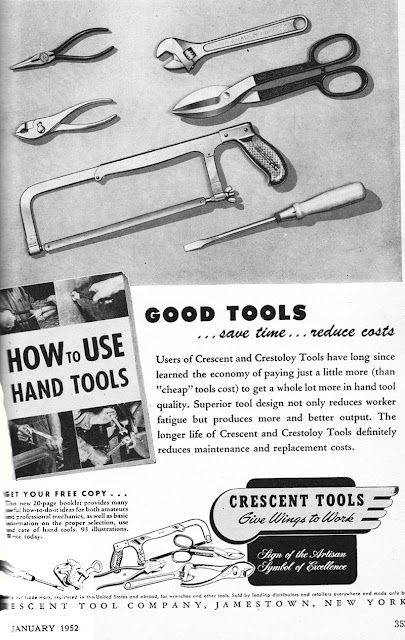 Below, from the company's 1964 catalogue.  These look like my flat wrench! 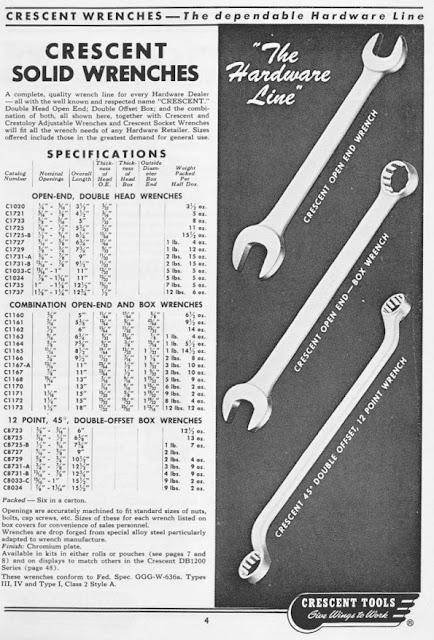 Karl Peterson came from Sweden to the U.S., originally designing and patenting a machine tool to carve best post spindles.  In 1907 he founded the Crescent Tool Company in Jamestown, New York, remaining president until 1933.  Originally, the company focused on pliers until Peterson received a visitor from Sweden who described an adjustable wrench, perhaps made by BAHCO, a Swedish company which also made an adjustable wrench based on a British design. The first Crescent adjustable wrench was drawn up in 1908 and became the first adjustable wrench produced in the States and soon afterwards Crescent adjustable wrench and pliers were being supplied with every Model-T sold by Ford.  In 1926, Crescent acquired the Smith & Hemenway Company of New York City, which specialized in pliers. Their catalogue of the time refers to products from the Crescent-Smith & Hemenway line. In 1927, Charles Lindbergh famously took one alone in his solo transatlantic flight.  The Crestoloy brand of alloy wrenches was introduced in 1930.  The company was sold in 1960, becoming the Crescent Niagara Corporation.  In 1962, Crescent Niagara acquired the Billings & Spencer Company, adding their products to its line.  The following year, Barcalo Tool followed suit.  In 1968, Cooper Industries bought Crescent Niagara.  The main Jamestown plant was closed in the 1970's or 80's,but the Chautauqua County Industrial Development Agency is housed in the old Crescent plant at the corner of Foote Avenue and Harrison Street.  Cooper Tools joined the Danaher Corporation to become Apex Tools in 2010. 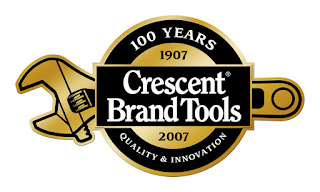 I have carried the same 4" Crescent adjustable in my pocket every day for over 48 years. Saved me hundreds of time and I used it twice this week. I have instructions to be buried with it (I might decide I want out, LOL).

I dug up what appears to be a latch of some kind, made by the Crescent company, but am unable to find any pictures of old latches. Does anyone know where to look? Thanks!

Thanks for your comment, you can send a picture to gerald@vanwyngaarden.ca and I'll add it to the post.