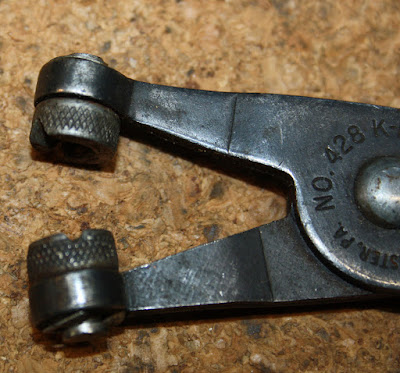 Above, the only two K-D tools I've encountered.

Harry W. Kulp and Martin C. Dellinger founded the K-D Manufacturing Company in Lancaster in 1919.  Their first products were valve spring tools resulting from multiple Kulp/Dellinger patents.  In 1923, the company became a registered corporation.   In 1957, the company was sold to Mr. George W. Marshall, Jr.  Ten years later the company moved into a new factory and also aquired the L.O. Beard Tool Company of Lancaster.  METCO Corporation bought K-D in 1969, which in turn was acquired by Easco in 1982.

I actually have 4 KD tools. I feel very fortunate.

Found one sitting in our shop. Took pictures if there is a way to share them. Let me know.
cory.gutshall@gmail.com