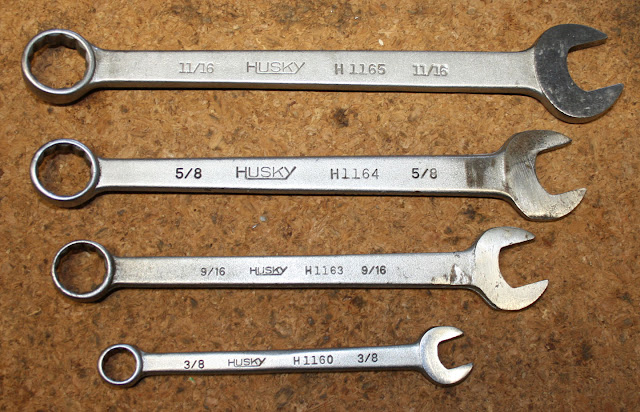 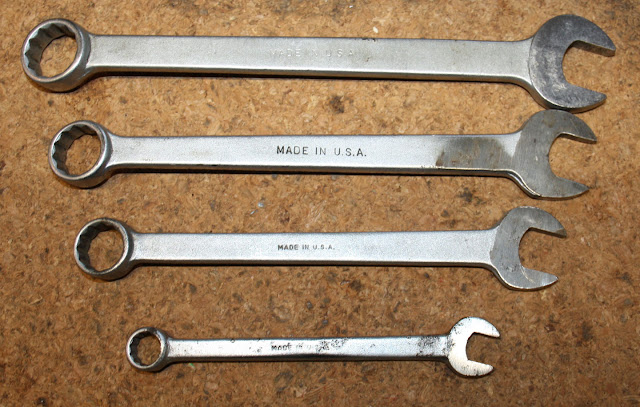 I found these four American-made Husky wrenches in the ReStore this week.  They're the only Husky hand tools I've yet encountered!

In 1924, an ex-pat Czech named Sigmund Mandle and others, some of whom had worked for the fledgling Snap-On Tool Company, formed Husky Wrench in Milwaukee, Wisconsin.  By late in the decade, they had made arrangements for some of their tools to be made and/or carried by the J.H. Williams Tool Company of New York City.  In 1929, the company was sold to the Olsen Manufacturing Company of Kenosha, Wisconsin (which had been founded the year before and set up in a plant formerly operated by the short-lived Winther Motor Truck Co. and later by the Kenosha Fire Engine and Truck Company) and relocated to that city, midway between Milwaukee and Chicago on the west shore of Lake Michigan. The company was renamed the Husky Corporation. Mandle left to join the Blackhawk Manufacturing Company of Milwaukee.  In the early 1930's, Husky was bought by the New Britain Machine Company, which was itself acquired in 1972 by Litton Industries (the giant US defense industry company, now owned by Northrop Grumman). In the 1980's, Litton sold off its hand tool division (which included Husky and the Blackhawk brand) to National Hand Tool.  Stanley came along and gobbled up NHT in 1986.  Stanley made arrangements for the Husky brand to be used exclusively by The Home Depot, which is now that retailer's house brand for hand tools.  As far as I can determine, the brand is now applied to tools made for The Home Depot in China and Taiwan.
Posted by The Duke at 12:45 AM

The first set of wrenches I ever purchased was a set of Husky combination wrenched in 1968. Bought them from a Western Auto store.