We used to make things in this country, #327 Toronto Elevators Linseed Oil 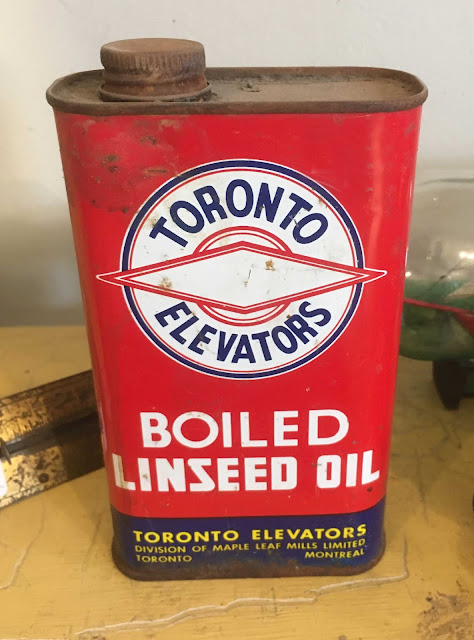 This product dates back to when the oil of milled flax seed (see previous post) was the new miracle substance. This can was sold as a wood finish and I remember my father using it to refinish gunstocks.  Linseed oil was also a waterproofing agent for canvas, used in paints and varnishes and was the basis of linoleum,  Being that it was presented as a new magic elixir, the oil was processed into different types of feed for various kinds of livestock and even showed up in medicines for people!
Toronto Elevators, a part of Montreal-based Linseed Oil Mills, built the plant in 1910 on Wabash ave near Sorauren Ave in west Toronto. This was a small industrial area south of and conveniently near the CN/ CPR rail lines. A number of paint and varnish manufacturers set up nearby, providing employment for local people for the first half of the century but the market declined as cheaper substitutes replaced the industrial uses for linseed.  Toronto Elevators merged with Maple Leaf Mills in 1961 and the company closed in 1969.