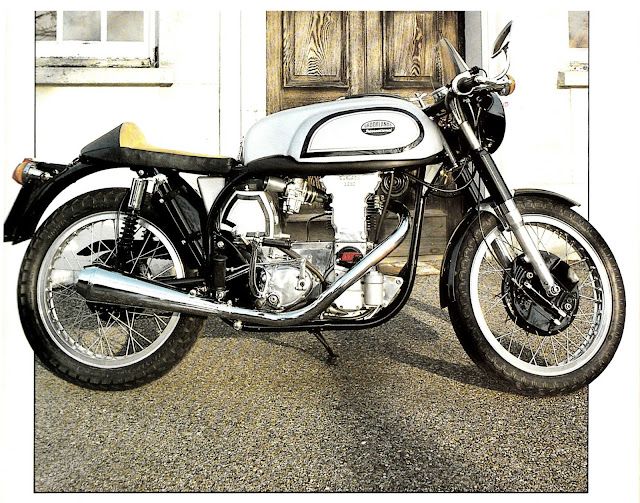 The image comes from a very optimistic article in the April 1982 issue of Classic Bike, Ian Thompson's company was making an all new cafe racer, using a replica Norton Featherbed frame and running gear, using a derivative of the Weslake DOHC speedway engine converted to dry sump form. Power was described as "adequate" and any minute now anyone with about £5000 would be able to take one home. Unfortunately, Weslake went into receivership just after an order for twenty five engines had been made. End of venture.
I hate to say it but the Weslake doesn't have the visual presence of the Norton engine at all.

There is a bit of info online on a similar cafe racer project with a 5 valve Weslake engine installed, and an article on the Brooklands company adventures in the Feb 2020 issue of Classic MotorCycle. 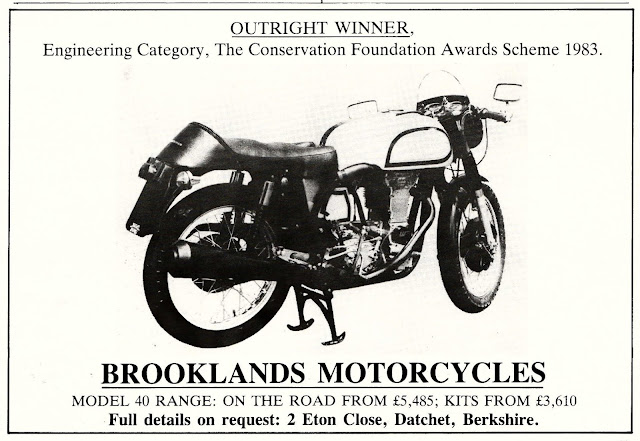 At a time that virtually every British motorcycle company was either out of business or going out of business seems like a poorly thought out venture, somewhat like the poor thinking of the rest of the Brit industry. Death throes maybe?

At the same time, various people promised to "save the industry." The woods were full of small firms trying to break in, usually with expensive "bespoke" bikes. And then there was Lord Hesketh, who actually went into production with the awful (but well-named) Hesketh Vampire.

In 1972 you could buy a genuine Matchless G50 engined Condor from Colin Seeley
for £1000, that's about £3700 in 1982 money, so this unproven contraption was
not exactly a cheap proposition.
Today ? A brand-new road-legal replica Norton Manx from Steve Tonkin will leave you with not much change from £40000, but who's counting...?