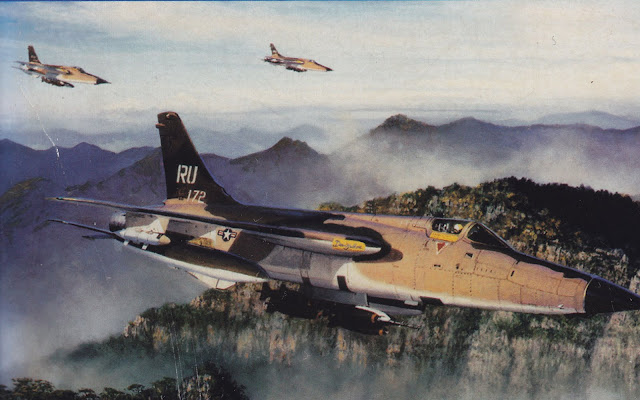 Two first-hand accounts of flying these brutes into combat during the Vietnam conflict.  More than 330 of these aircraft were lost, the highest loss rate in Southeast Asia.

Ed Rasimus (1942-2013) flew his Thunderchief for six months and over 100 missions in 1966, out of Korat Base Thailand as a lieutenant in the 421st Tactical Fighter Squadron. The book's dedication reads:


"If you aren't living on the edge, you're taking up too much room."


His is a pilot's memoir, and he puts the reader right into the pilot's seat:

"Let there be no doubt about it, running along on the tree-tops at 540 knots in a flight of four F-105s loaded with high explosive iron may be the most exciting thing a man can do with his pants on.  You've got the most impressive piece of machinery on the planet strapped to your ass, and it responds to your every wish.  The throttle controls the beast's heartbeat, and the slightest movement of the stick directs your flight path.  You're the Lord of Evil perched on your rocket-powered throne, coming to deliver justice.  It's exhilarating and thrilling, frightening and almost orgasmic.  But it isn't necessarily tactically sound."

His book is also a very frank critique of the failure of the military command structure and political maneuverings in Washington that forced these pilots to fight with one hand tied behind their back.

Jack Broughton (1925-2014) had the distinction of being combat-qualified in every air force fighter from the P-47 to the F-106.  He led the Thunderbirds, the U.S. Air Force acrobatic team, from 1954 to 1957.  During the Vietnam war, he was vice commander of the 355th Tactical Fighter Wing at Takhli Royal Thai Air Force Base between September 1966 and June 1967, during which time he lead 102 missions.  From the perspective of his higher rank in the command structure, his book is a stinging indictment of the prosecution of the war in Southeast Asia.  His dedication reads: