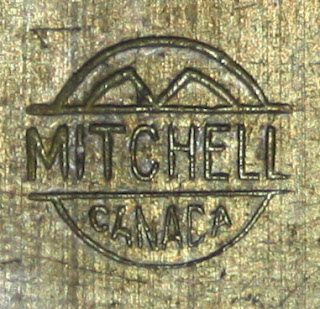 Somewhere I acquired this odd piece of brass.  It's about 1 mm thick.  Obviously, it was part of something else.  Seeing it was made in Canada, I did a google search and was able to locate the company, which is still in business.

Robert Mitchell emigrated from Scotland in 1848, and three years later founded the Robert Mitchell Company in Quebec, also known as the Montreal Brass Works.  The company comprised brassfounders and finishers, coppersmiths, and manufacturers of gas and electric light fixtures.  In fact, they were involved with the introduction of electric lighting to the city in 1884.

Surviving several factory fires, in 1927 the company went on to acquire the Garth Company, a Montréal manufacturer of gas pipe fittings founded in 1828 (and which lost their largest iron foundry to fire in 1899).

During World War II, they employed over 4000 workers producing brass ammunition cartridges.  In 2000, they were bought by Marshall Barwick, a Canadian privately-held investment company controlled by the Hawkins family.

As for what my piece of brass was part of, I have no clue.  I did email the company some time ago asking if they could assist me with identifying this piece for a future post I'd planned on their company. Typical of North American firms I've contacted with similar requests, they didn't so much as give me the courtesy of a response. So, it'll get tossed into my scrap brass drawer to become raw material for some future shop project.

I have one of those! although don't think mine has a makers stamp, will have to dig it out.

Anyway i know what it was/is for as I was given it by my grandfather, along with his ww2 army cap badge and some other bits. Has a rather specific task, as its to slot behind the brass buttons on a military uniform, when you were polishing them, to stop you from getting polish/ dirt on the fabric, Guess they were part of the army kit in those days? probably of little use these days but an interesting piece of history.

Thanks so much for this information! I'm going to dig it back out of the scrap brass drawer, since it's too cool just to cut up for something else! Another piece of history saved!