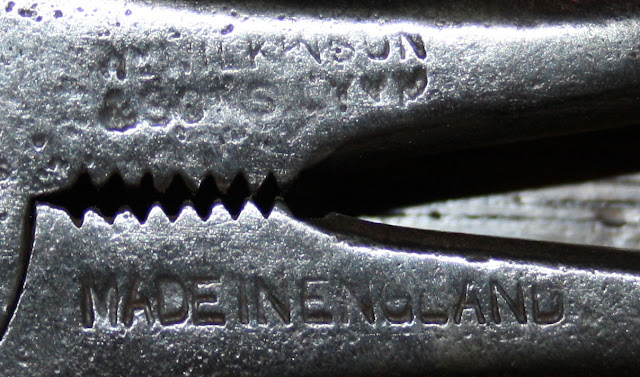 An old pair of fence pliers made by this firm.  The stamp seems to read, "Wm Wilkinson & Sons LY" followed by two hearts.  As can be seen, the cross-hatching pattern on the handles is extremely fine.

Interestingly, the company does not seem to have any relationship to another British pliers maker, Wilkinsons Tools Limited.

The company dates back to 1730, operating out of the Spring Works, Grimesthorpe, Sheffield. I found the following entry concerning the the Centennial International Exhibition of 1876, the first official World's Fair in the United States, held in Philadelphia, Pennsylvania to celebrate the 100th anniversary of the signing of the Declaration of Independence:

William Wilkinson & Sons, Sheffield, England, exhibited a different class of cutlery from any of the other Sheffield firms, viz., a selection of pruning-shears and farriers' knives. The value of this class of tools consists in the quality of the steel, and in the skill of the workman in their construction: a high finish is not required. This exhibit evinced great care, and the tools were admirably adapted for the purposes intended.