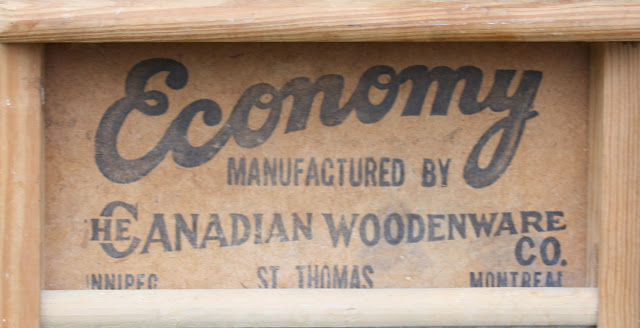 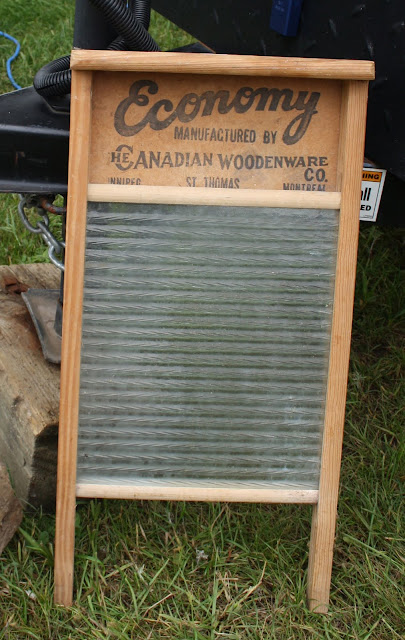 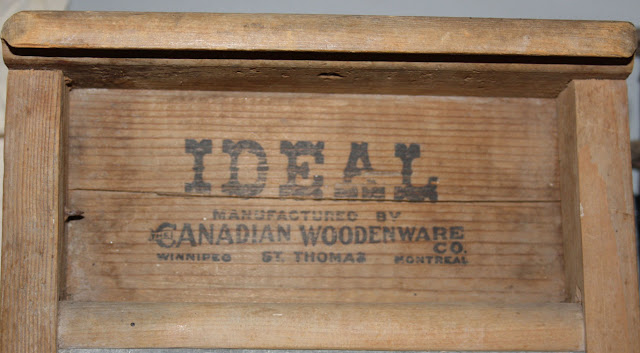 The Canadian Woodenware Company was founded around 1916. The production machines themselves were all made in Canada, primarily from former industrial centres like Galt (now Cambridge), Ontario. For decades, their two iconic washboards were the full-size Economy and the smaller Pearl, along with The Canuck, Empire Globe, Jubilee, and All Wood Rub.  At its height, Canadian Woodenware made 18,000 washboards a year. It also produced wooden hangers and wooden washing machines.

The caption for the picture above reads:

In March 1976, Dick Gooding, one of only three employees in the woodwork shop at the Canadian Woodenware Company on New Street, assembled another wooden washboard. At that time, the bass wood boards used only rough glass for a scrubbing surface, although for years all kinds of metal and wood surfaces were also used.

The company was sold to Hessel de Boer in 1993. The original factory was destroyed by fire in 2013. However, facing a decline in demand for washboards, he posted the production machinery on a website for selling vintage machinery.  It was bought by  Andy Sharpe,  a cabinet-maker and vintage-tool enthusiast who moved it to Havelock, Ontario to continue production there as the last Canadian manufacturer of washboards.  They are now available through the Home Hardware chain.

Mr. Sharpe had previously bought and restored a log house initially built in 1825.  According to a 2011 article by Mark Hoult in the Community Press:

The walls of the house indicate Stewart was not an experienced builder, Sharpe said, noting the logs are joined at the corners by simple half flaps instead of being dovetailed. In addition, the gaps in the walls were filled with small pieces of wood, instead of lime mortar. "It shows that there was nobody here to show Mr. Stewart how to build a more elaborate joint. It shows that it was a very primitive earlier house, having all those pieces in there. And it shows he was here on his own and did what he had to do. You can tell the hardships the early settlers went through just by this example of log construction."

Sharpe said he also discovered the back wall of the house is 12 inches longer than the front wall.

"There was no tape measure back then," he said, noting that the government provided new settlers with an auger, an axe, a hammer, a saw and 100 nails. The were also given a cow, three hoes, an iron kettle and pot, a frying pan, three bushels of seed potatoes and eight quarts of Indian corn.

Have an old one whats the value of it

Unfortunately not much. They are still making them!