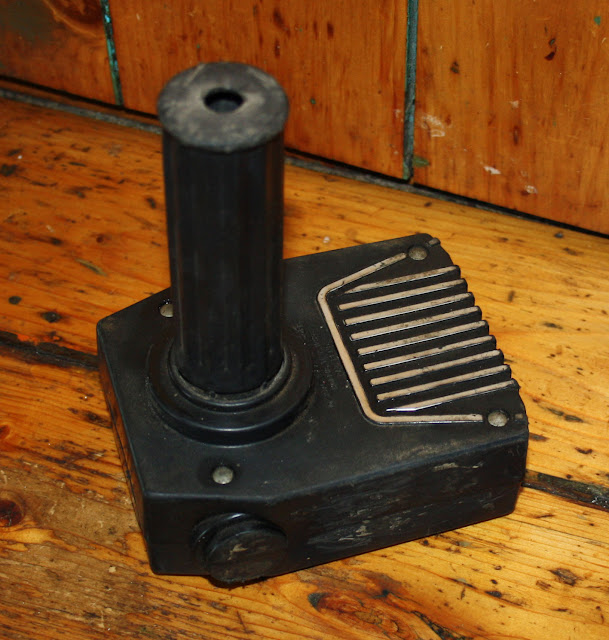 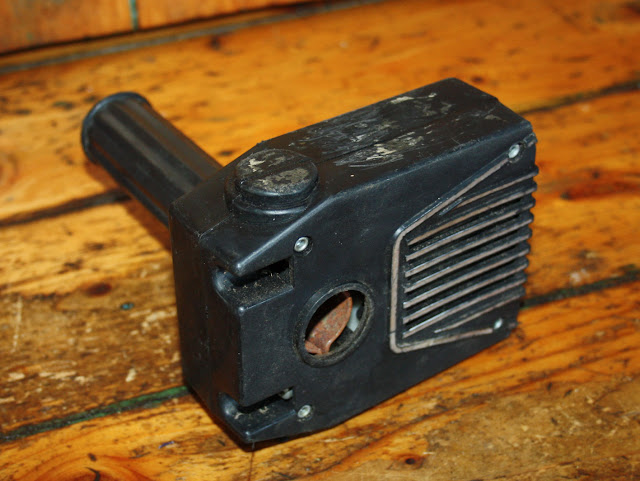 I've had this goofy bicycle accessory sitting around in my shop for ages.  It's based on U.S. Patent 4,055,914, issued in 1977 for a "sound producing device."  When you twist the throttle, a "striker" cyclically strikes a "resonator cone", making a simulated two-stroke engine sound.

(In my day, you did more or less the same thing much more cheaply by attaching playing cards to the rear frame of your bicycle, so that the spokes would make a whirring sound as they rotated pass the card. Progress is fine...)

Below, from the web, how "RRRRAW POWER" was attached: 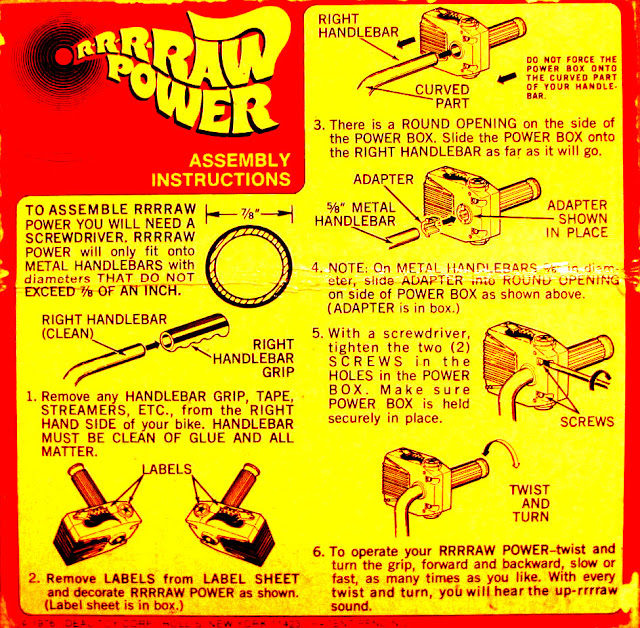 It advises you to remove any streamers.  Remember those?  According to these instructions, it made an "up-rrrraw sound."

Back in the day, the Beaver County Times even offered these toys as prizes:

Here's a TV ad for the device from youtube:

The toy was made by the Ideal Toy Corporation out of Hollis, New York:

That company was founded in 1907 in Brooklyn by Morris and Rose Michtom as the Ideal Novelty and Toy Company, with teddy bears as its product.  The company really took off in 1935 with their successful Shirley Temple Doll, when they moved to a larger factory in Long Island City.  In 1943, they moved into an even larger facility in Hollis and in 1953 the name was changed to the Ideal Toy Corporation.  The company became a big deal:

In 1972, in search of even larger premises, the company submitted a plan to build in an area of the New York City that was also being considered for a stadium.  Ideal's plan was rejected, and the company pulled up its roots and moved to New Jersey. According to an article in the New York Times:

Losing out to Shea Stadium had some compensations. Under New Jersey industrial development programs, Ideal enjoys a 15-year tax abatement that cuts its tax bill on the Newark property by almost 80 percent - $800,000 a year. Government-assisted financing also saves Ideal $500,000 a year in interest costs. The Federal Economic Development Administration financed 65 percent of the cost of building the Ideal factory, and $3.8 million in Federal Urban Renewal funds was used to buy and prepare the factory site.

Corporate welfare at its best.  The firm went on to introduce the Rubik's Cube (considered to be the world's best selling toy) and did very well off of that toy craze in the early 1980's. However, profits began to decline and, in 1982,  the founder's grandson sold the company to CBS Toys for $58 million. CBS sold it to Viewmaster in 1987, then Viewmaster was bought by Tyco two years later, which merged with Mattel in 1997. End of the line.

I recall, as a young kid, seeing a similar device that worked and sounded like the "RRRRAW POWER" unit, however it looked very much like the 3 speed shifter console that was common on the better "Mustang" style bikes of the day. Mounted on the top crossbar, you would rock the "shifter" forward and backward to activate the noise simulator.
I see that Mattel also got into the game at some point, selling a whole bicycle fitted with a much more elaborate "Vroom" electronic noise generator along with a fake gas tank and engine as well. Never saw one of these myself, I guess only the kids in the rich neighbourhoods had 'em.