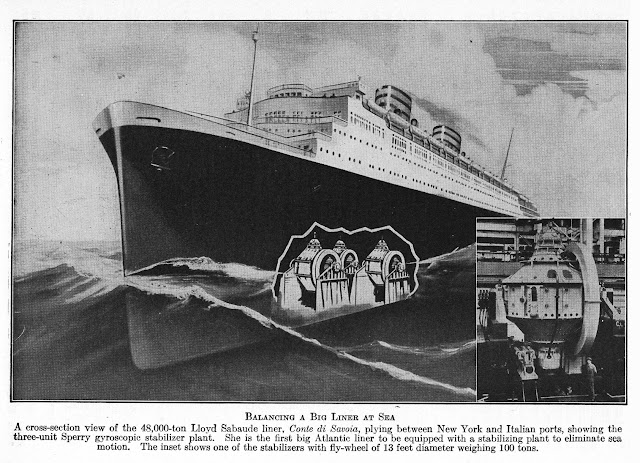 Elmer Sperry thought up this application after being tossed out of his bunk on a sea trip to Europe.  His first full-size stabilizer was installed on the U.S. destroyer Worden, transforming its handling characteristics.  The navy remained unconvinced, but wealthy folks bought the device for their yachts.  The Conte di Savoia was the first liner to adopt a Sperry gyrostabilizer, installing three eighty-ton gyros at a cost of over $1 million.  The publicity was so successful, that the Italian owners had to stop advertising the feature.

In practice, the gyros didn't work out so well.  See S.S. Conte da Savoia.  Nevertheless, she was considered a very beautiful ship.  Depending on your source, she was either burned and sunk by the Nazis or destroyed by Allied bombing in 1943.  If truth is the first casualty of war, beauty must be a close second.