I really didn't need another electric drill when I found this one, but I had to buy it purely because I loved the name:  "Hole Shooter." 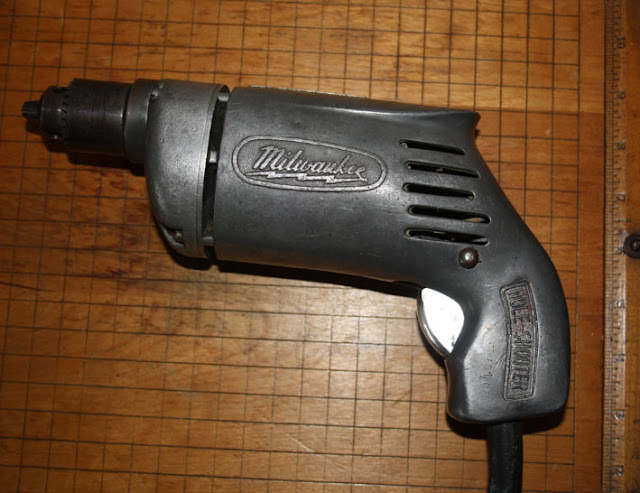 Duncan Black and Alonzo Decker, two American inventors, came up with the pistol grip and trigger switch in 1914, and patented them in 1917. (Incidentally, Black and Decker combined with Stanley in 1910 to become Stanley Black and Decker, another huge conglomerate started by men who, ironically, were poster children for individualism.  Prior to getting into electric drills, they had a business in Baltimore making things like milk bottle cap machines and currency cutters for the U.S. Mint.) Looking through my reference library, I discovered that, after the pistol grip appeared, drilling a hole was referred to as "shooting a hole."

In 1918, A.H. Peterson, a young well-known tool and die maker, was asked by Henry Ford to create a lightweight drill for Ford's automotive production lines. A.H. Peterson came back to him with the hole-shooter: a lightweight, high-powered and durable 1/4" drill. This five pound drill would become the benchmark of all drills to follow. Up until that time, only the strongest ape men could use a "hand-held" drill as most were very heavy and cumbersome.

In 1922, A.F. Siebert joined forces with Peterson to form the A.H. Peterson Company which only lasted a year. Between the fire that destroyed their factory and the recession, the company went bankrupt and was auctioned off to A.F. Siebert, later to be called the Milwaukee Electric Tool Corp.

During the first years of business, Milwaukee kept its doors open by repairing other companies' tools. This gave them an opportunity to find out what other tool manufacturers were up to. Milwaukee has always been a company that kept its ears to the ground in the industry. Through paying attention to the innovations of other tool companies, Milwaukee continued to improve its Hole-Shooter with better gears, switches, brushes and cords, which earned them a U.S. Government equipment-specification rating.

The U.S. Navy took notice of this and based its own standards on Milwaukee's tools, solidifying them as an industry standard tool company. The hole-shooters were used extensively in WW2 on anything from airplanes to battleships. Some might say that Milwaukee played a significant role in the outcome of WW2.

Since then, the hole-shooter has gone through several iterations and is still available today. The name "Hole-Shooter" has been adopted to several different drill designs since, all of which are considered industry-standard drills.

(Above textual information taken from this website)
Posted by The Duke at 9:39 AM