I've got back into cross-country skiing after an absence of a very long time.  I dusted off my old wooden skis (Made in Canada!) and am in the process of re-learning all of the rituals of waxing. Fortunately, I'd packed away all of my old book resources:
All of these authors were big names in the sport back in the Sixties and Seventies.

I also wanted to pick up a pair of skis for my older son who is at home in between jobs, and I found a nice Finnish-made pair of wooden skis at a thrift store for $3.  They're made by Karhu (which is Finnish for "bear") and have the coolest logo on the tips: 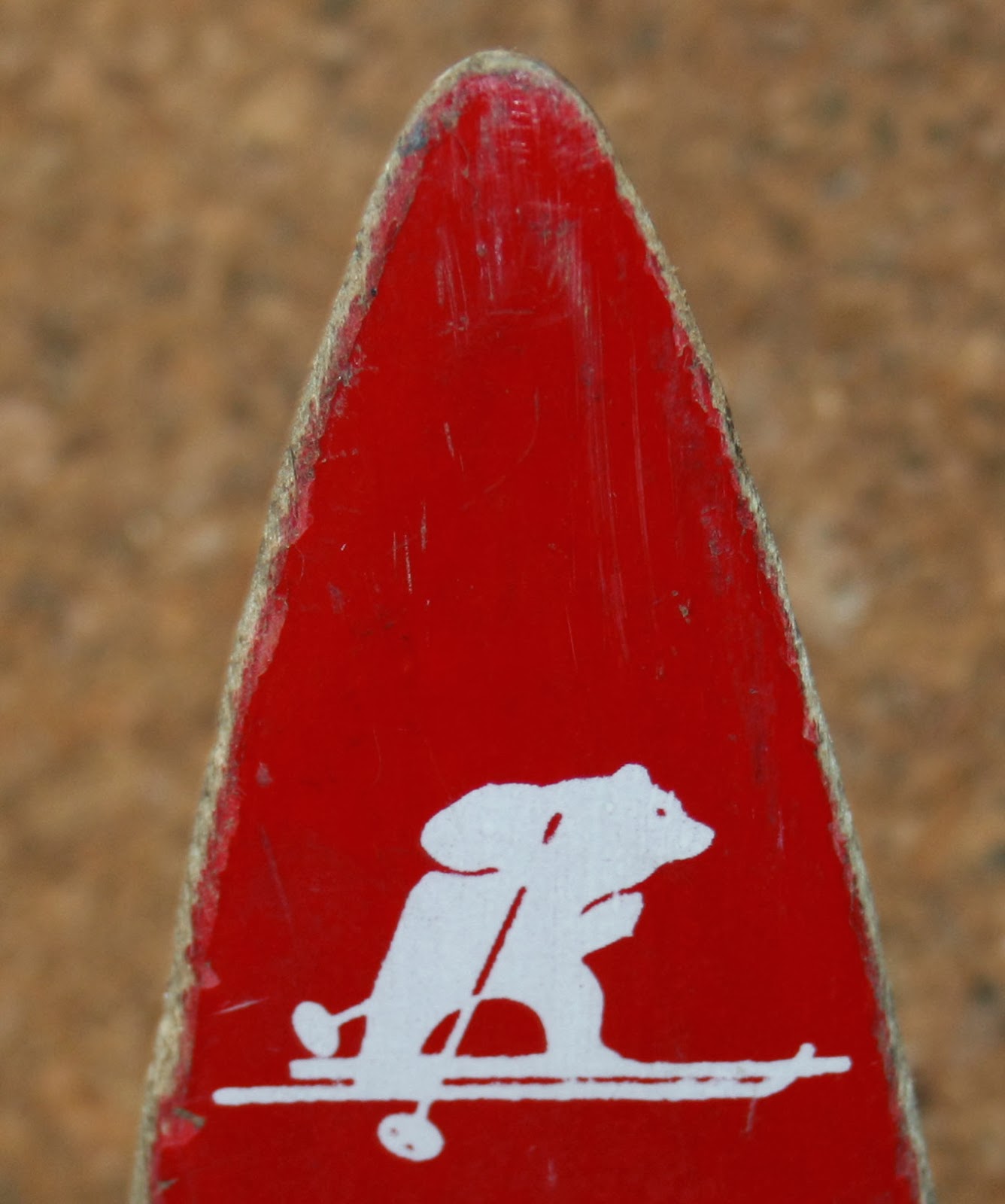 (Karhu was founded in 1916.  In 1950, it sold its three stripes trademark to a now well-known athletic shoe company that still uses it to this day. 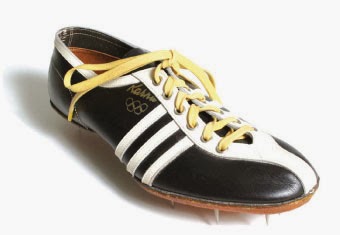 The price? Two bottles of good whiskey and about 1,600 euros.)

Cross-country skiing dates back to pre-history.  Rock drawings on the Island of  Rødøy in Norway from 4600 BC portray this activity.

In his 1674 book Lapponia, the medieval historian John Schefferus wrote:

"The natives advance at astonishing speed on strips of wood tied upon their feet, bent upwards at the front.  Steering with a stick they thus run unhindered at will up, down or across the snow-clad summits.  No Latin word for this exists, since the Romans never moved in such fashion." 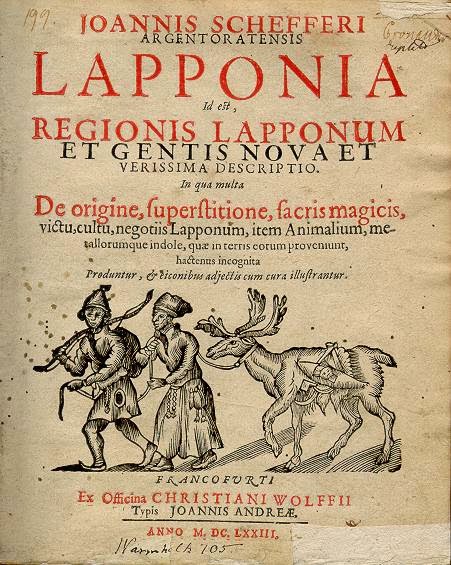 In North America, cross-country skiing became a phenomenon in the late 1960's.  Fibreglass skis began to supplant wooden ones in the mid-1970's, followed by so-called "waxless" skis.  In his excellent book Skiing Cross Country , Ned Baldwin (whose day job was project architect for the CN Tower in Toronto) explains that the very popularity of cross-country skiing killed off the older wooden ski manufacturers, which could not keep up with the demand and who could not compete economically with the alpine ski manufacturers who added cross-country skis to their production lines, making them cheaper but pricing them higher.  He writes:

"Those still making wood skis complain about the high cost of labour required to finish them.  Many wood skis used to be hand-sanded and shaped to reduce their weight.  Today this is impossible since mass production techniques require machine finishing of the ski.  Weight is reduced by side channeling only.  Most unfortunate of all is the loss of fine geometric characteristics of the hand-made wood ski now no longer available.  Wood skis used to be dramatically 'waisted' or side-cambered; that is, much broader at the tip and shovel than at the midpoint and somewhat wider again at the tails.  This made their tracking characteristics far superior to the modern virtually parallel sided ski which has replaced them.  I am always buying old wooden touring skis, especially broad ones, whenever I see them. ... One used to able able to find good skis of this kind in the Salvation Army or Crippled Civilian stores, but today many people are beginning to recognize that they are quite valuable."

"I almost feel ridiculous writing about the preparation of wooden skis for waxing when to-day, fewer and fewer skiers are able to acquire them.  However, I hope that somehow some of the smaller manufacturers will survive the competition from the synthetics and keep them available."

Now, 35 years later, I'm discovering that pine tar base wax, which used to be available at Kresge's for a couple of bucks, in now a high-priced commodity only available at specialty stores like Mountain Co-Op.  At least they do still carry it for those of us who cling to the old ways.  Even Canadian Tire has a very, very limited selection of cross-country skis (in my local store, two pairs of skis and a few containers of wax).  The sport is clearly not as popular as it once was. 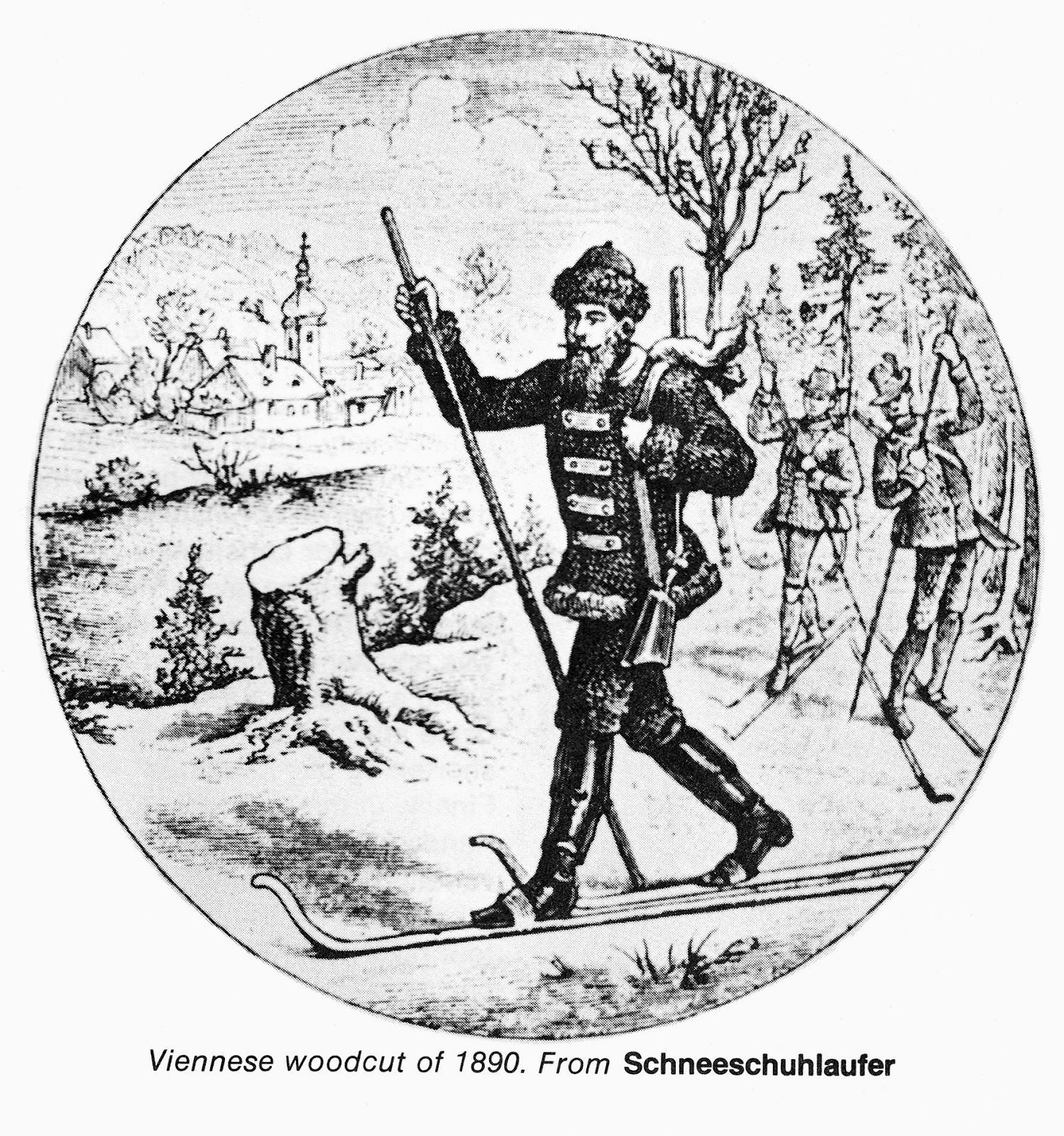 Below, in this cartoon by Pedro, a cross-country skier (lower right) looks askance at Alpine skiers. 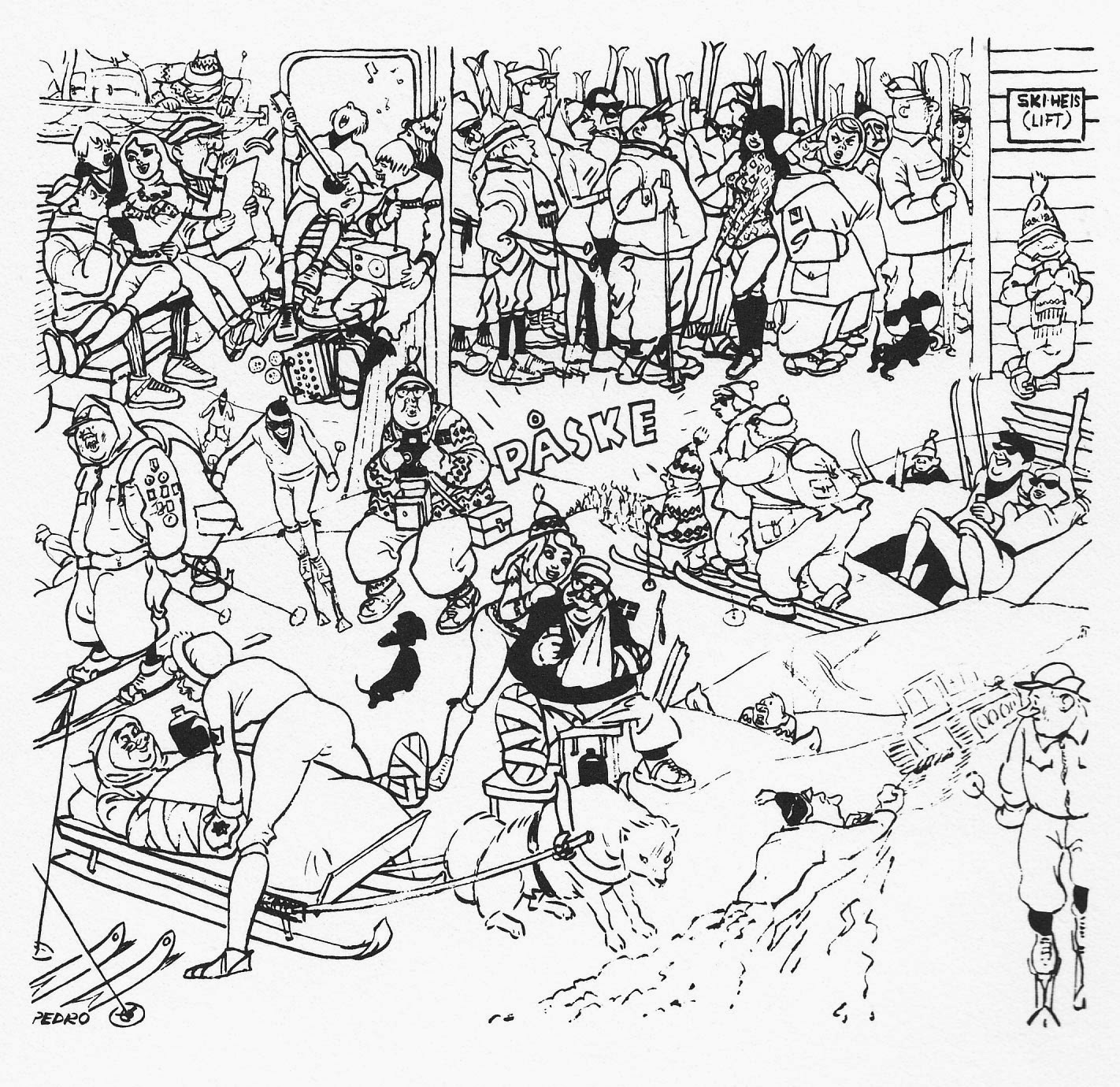 Not everyone is unhappy with the technological progress in this area.  Below, from Richard Needham.  Ski.  Fifty Years in North America.  (Harry N. Abrams, Inc., 1987). 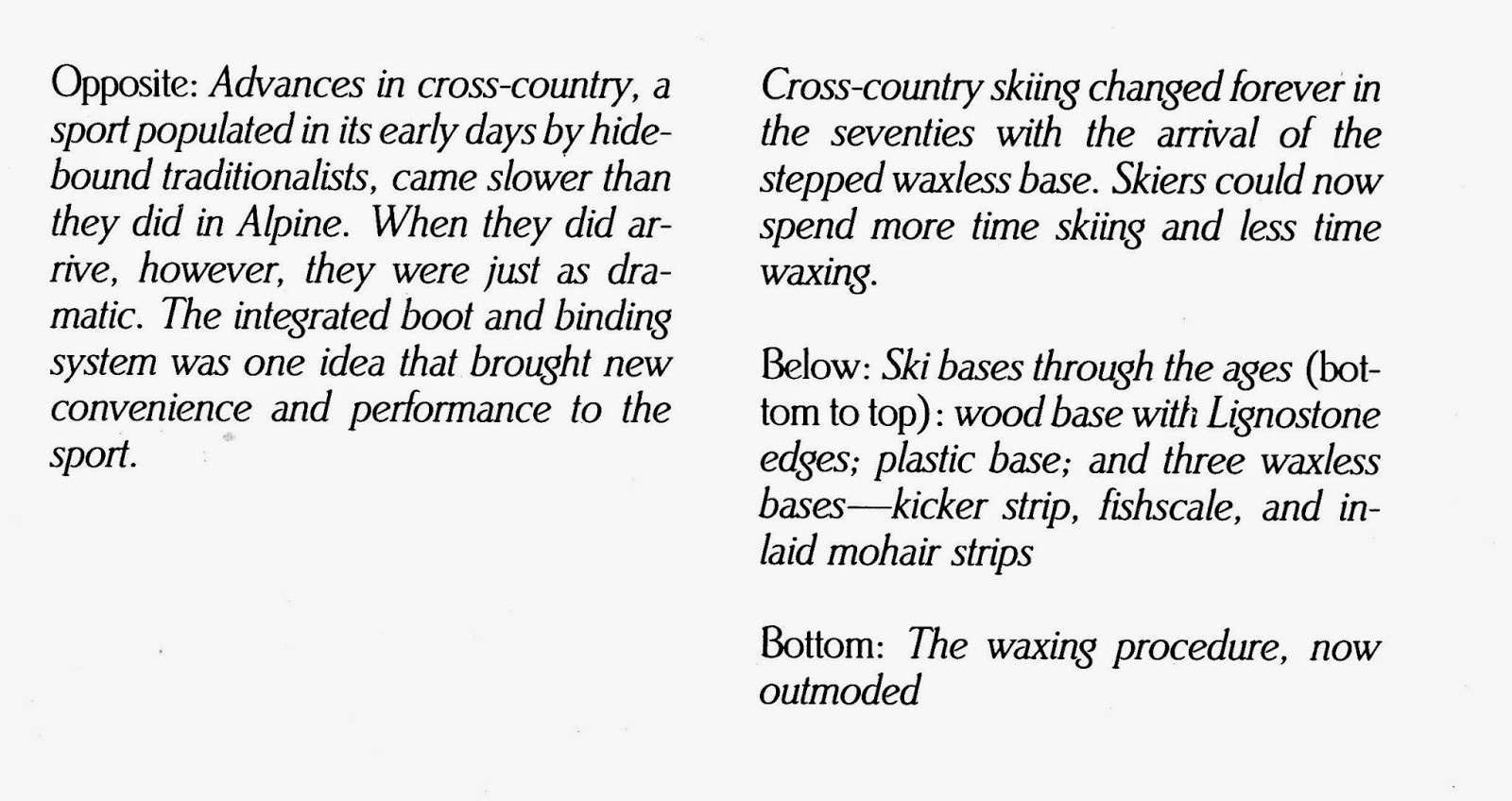 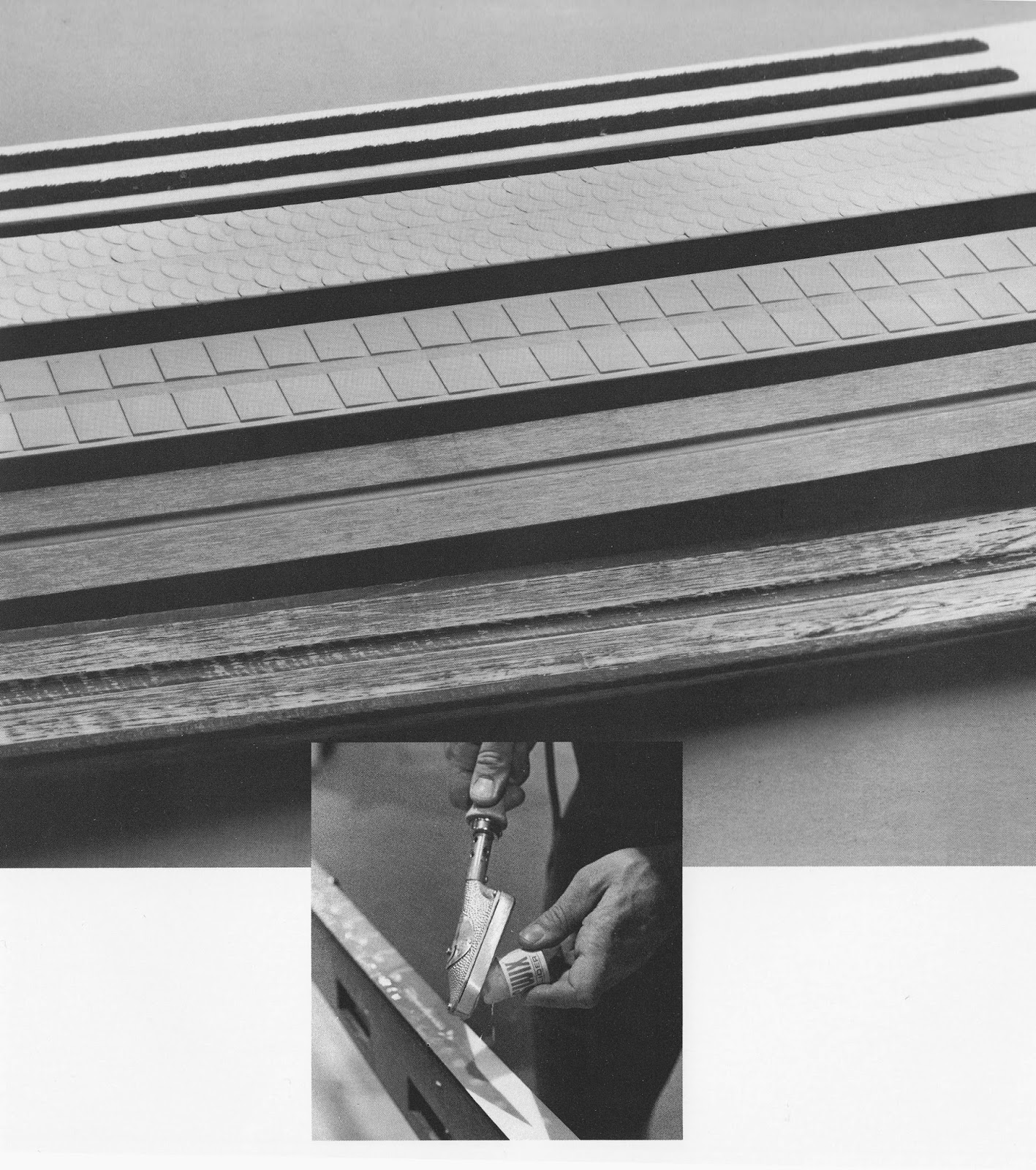 "The price? Two bottles of good whiskey and about 1,600 euros.)" Did Adidas have to pay Karhu yearly royalties for the use of the three stripes?

I wonder. Someone must know.