We used to make things in this country. #221: James B. Carter Ltd., Winnipeg, Manitoba 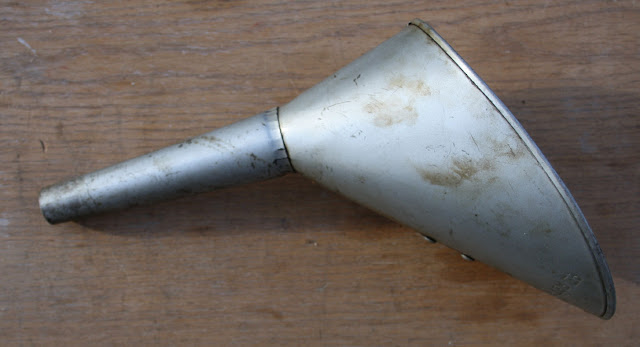 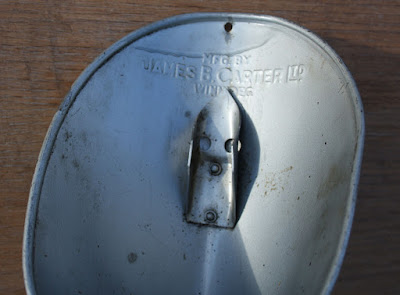 I've got a couple of these very large metal funnels, made back in the day when oil came in cardboard or metal cans and you would pierce the top by pushing the can against the sharpened metal fixture on the funnel, which also held the can in place while it drained.  This seems to have been a big seller for the company, since if you google their name, these things come up most frequently.

Carter founded his business in 1920.  The company moved into car heating products to meet the needs of Canadian drivers during our cold winters.  They also developed frost shields for automobiles, and pioneered the special seals necessary for these shields to be effective on aircraft.  First used on the aircraft of Trans-Canada Airlines, they quickly spread to other airlines flying in cold climates.  Concludes the Royal Aviation Museum, " A simple piece of plastic – adapted for the rigors of flight and developed in the frosty centre of Canada – made flying safer and more dependable."

In the 1970's, the  firm became Carter Temro Limited. Two years later, it was acquired by the Budd Automotive Company of Canada, located in Kitchener, a subsidiary of the Budd Company of Troy, Michigan.  Under this arrangement, the Carter name was lost when it became the Temro Automotive Division of Budd.   In 1976, Budd bought the the Phillips Company of Minneapolis, so the old Carter firm then became Phillips & Temro Industries.  In 2002, when Budd itself was acquired by ThyssenKrupp AG, Budd sold the Temro & Phillips to TMB Industries, a private equity firm out of Chicago. The company changed hands several times again before being acquired by the Boston-based Audax Group in 2012.  One of their first moves was to shut down the Canadian operation, consolidating all operations in Minnesota.  Although the Winnipeg plant was making money, the new owners decided that they could do better by moving all production to a non-union American plant, putting about 200 Canadian workers, primarily women in their 50's, out of work.  Nothing personal, just business.

Good post. I worked at Temro for 10 years in Wpg in the 80s. It's amazing how many of their products were seen on a daily basis. Every gas station had a bunch of these funnels, every car had frost shields (until improved auto heating systems came along), and the interior car warmer was very common.
During my time there the car warmers were outsourced to China with numerous quality problems. Frost shields were almost out of production by 89 but the rest of the business was going strong. Sad day when I learned the Wpg plant had been closed and moved South.

I found a package of these frost shields when I was clearing a building and had to look up the James B Carter Limited history. Proud it was made in Canada.

Found my dad's old yellow commercial heater. Didn't know what it was until I googled it. I'm sure I'll find some funnels in the garage too.

Nice to see this. He was my grandfather and was quite a man