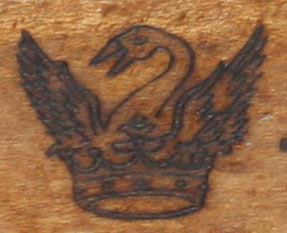 Years ago, I lived in an apartment in an old house.  The basement was full of stuff that previous residents had left behind.  This included an old wooden folding ironing board, which I liberated.  It was very sturdy, and I still have it.  Anyway, I recently happened to notice the label on it:  Stur-Dee, made by the Tucker & Dorsey Mfg. Co., complete with their swan and winged crown logo.

There's some interesting history here, from a day when wood was a major manufacturing material. William H. Tucker fought at a number of important battles during the American Civil War and by some accounts attained the rank of General. Afterwards, he began selling "Tucker Alarm Tills" which incorporated a bell that rang whenever the till was opened. The device was based on several patents that had been issued to his father. He was eventually joined in this enterprise by Robert Dorsey of the hardware firm Dorsey & Layman of Indianapolis, Indiana. Together, they founded the Tucker & Dorsey Manufacturing Company in 1865. They eventually branched out into hardware and woodenware specialities, making more than thirty different kinds of goods and over 200 different specialties including cabbage slicers (more colloquially known as "kraut cutters"), mop wringers, towel rollers, clothes hangers and coat racks. Quality was high enough that Pullman coaches were outfitted with T&D coat racks, as were a number of prestigious hotels in North America and Europe.  They also made factory trucks and carts, using parts from their other enterprise, The Phoenix Caster Company. At their height, they employed over 100 workers and exported one-eight of their production to foreign markets.

In spite of his wealth, Tucker himself led a tragic life. He lost a brother, two sisters and his wife.  In 1893, a horse he intended to trade got out of control during a training session. Tucker attempted to jump out of the buggy but got tangled in the lap robe and lines, and was dragged along the roadway, tearing the skin from his face and almost severing his nose.  Suffering from depression, in September 1898 he arrived at the office early in the morning, took out the revolver left in a desk for the night watchman, and shot himself just below the heart.  Apparently not satisfied with the result, he then shot himself again, this time in the right temple. He was only 54. He left behind a 15-year-old daughter, Willanetta.   I can't find any record of how she got on after this tragedy.  The company itself seems to have endured until 1977.

Thanks for the information, have one of their Kraut Cutters, saw the company logo and wondered about it.

I'd love to have a picture of it to add to the post, thanks for the visit!

I have a Stur Dee ironing board which I use for extra counter space and just noticed it was made by Tucker & Dorsey. It’s a great
conversation piece. My mother bought it in the 30’s.

I also have a Stur-Dee wooden ironing board. Thanks for the information about its history.

Frostproof FL Historical Museum has a till which was used in our train depot. Depot began operation in 1912. Is there a way to give a date to this item

Sorry, can't help, but hopefully someone will see your request.

I am from a small town in Commanda Ontario Canada. I am artifact director at our museum. We have a numbered wooden alarm cash box with the crown and swan logo. It is a beautiful conversational piece.