We used to make things in this country. #268: Kendall Canada, Toronto 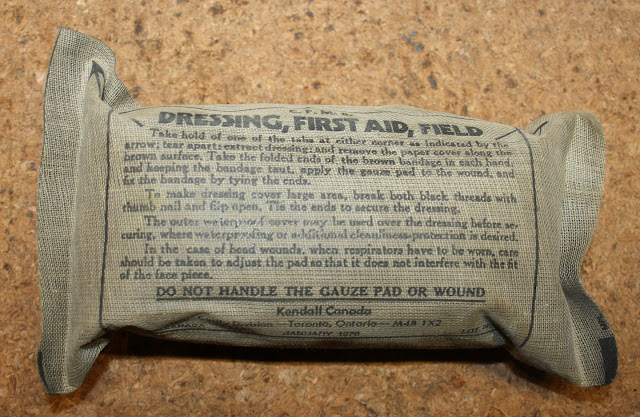 Above, a military field dressing made by the Curity Division of Kendall Canada.

In 1903, Henry P. Kendall bought the ailing Lewis Batting Company in Walpole, Massachusetts and over the next few decades built it into a power house.  (As an aside, the company has no relationship to Kendall oil, as some folks state on the 'Net.) In 1928 they acquired Chicago-based Bauer & Black, and changed the firm's name to the Kendall Company.  (Bauer & Black had developed the Carlisle surgical dressing during World War I.) 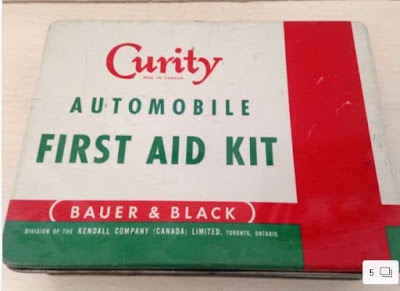 Kendall aggressively developed new products for the consumer market, including gauze "Curity" diapers for the baby boom and ready-made surgical dressings, replacing the 100-yard bolts that used to have to be cut by hand into smaller sections for hospital use.  Their Toronto plant was built in 1950.

In 1953, on the occasion of the company's semicentenial anniversary, Henry Kendall made the following remarks:

Early in my business life the meaning of obsolescence was borne in upon me. I saw that the only permanent thing in the industrial world is change. It became clear to me that machines could sometimes run long after their profitable economic life had ended. As the world goes forward, obsolescence applies not only to what you can see, like buildings and machinery, but also to intangibles like ways of doing things, methods and procedures, and points of view.

So we have tried unceasingly to make buildings and machinery more efficient, and to find ways to better our methods, save labor, reduce costs, and improve products. This requires imagination, open-mindedness, courage, confidence in the future, and willingness to spend money to make money.

It always has seemed to me that quality of personnel and the spirit of the organization are even more important than bricks and mortar, money or products. The essence of The Kendall Company and of all it has done is in its people.

A defined philosophy of people runs through our history. As we see it, an office or factory is not just a place to work for a living. It is, rather, an important part of the whole life of every worker.

So we have tried to provide not only good surrounding and good equipment for our workers, but we have shared with them our belief in the importance and worth of every job and its significance in the chain of production.

Nice sentiments from over 50 years ago.  I suspect such attitudes no longer prevail today.

In 2007, the Kendall Company became part of the Ireland-based firm Covidien, which in turn was acquired by Medtronic in 2015. At some point, the Bauer & Black trademark passed into the hands of Becton-Dickinson and 3M.  As for the Toronto factory, it appears to be long gone.