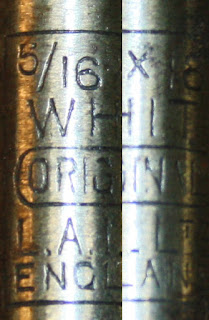 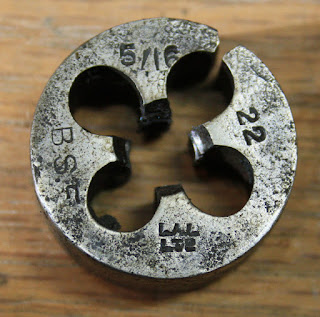 Above, a tap and a die made by this firm.  The company dates back to the 1890's.  According to one story I read online, when the British Association (BA) thread form was developed, Mr. Lehmann was approached by the committee to produce the very first BA taps and dies from 0 to 16 BA.  To do so, he had to develop special machines to produce these special thread cutting tools.  The firm operated initially out of Derwent Mills (now a World Heritage Site) and then out of  their Hampshire Works on Forest Road, Ilford, Essex, in east London.


Apparently, their tap and die works was located in the new town of Newton-Aycliffe in the north-east of England.  (According to  its Wikipedia entry, "Aycliffe was a key element in World War II ammunitions manufacturing. The marshy land was ideal cover against the Luftwaffe as it was almost continually shrouded in fog and mist. Huge grass-covered munitions factories were built and serviced by the nearby railway lines. The factories were largely staffed by women (in their thousands); these ladies were dubbed the "Aycliffe Angels", who braved incredible dangers inside the factories."

They eventually produced taps under the "Blue Wizard" trademark.  In Canada, this was first registered in 1960.  The company was bought by Osborn-Musket Tools Ltd. (now Clarkson-Osborn) which still uses the Wizard trademark:

I found a set of 6BA LAL taps in my company`s workshop. I don`y know how old they are but they cut beautifully I used a NEW set of Presto one for comparison and they are rubbish; having to back off every half turn as they bound up giving that "springy" feel you get when cutting a thread just before a tap breaks.

My dad Ronald Frederick McSweeney worked there in 1950. He is pictured on their April 1950 calender page

Thanks! Send a picture and I'll post it! gerald@vanwyngaarden.ca

My mother worked at the Forest Road plant in the 60’s acid etching the sizes on blue wizard taps, I still use her gifts 60 years later as a machinist in Canada

Thanks for this info. Was sorting through my late dad's tools and found dies made by LAL, Presto and Easterbrooks. Nice to be able to locate history of these manufacturers.