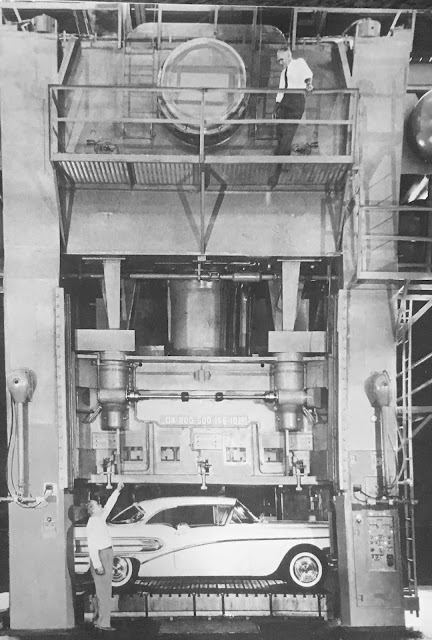 Big Time. A 1958 Buick is driven into and posed inside the 350 ton, 46 foot tall hood-stamping press in the Flint, Michigan GM plant. Is that machine still working, I wonder?
Posted by Mister G at 11:37 PM

Probably, yes, at least it was until 2009, when it was revamped.
By the way, in the USA, high-power stamping presses are considered strategic defense equipments (not all, of course, but there is a mandatory registry - Critical Technology Assessment, Defence Act of 1950), so they are protected against being sold or dismantled, and, when sold to be scrapped, they have to be scrapped (destroyed).
There are a few others, like very high diameter lathes, turning mills and gear-milling machines.

I never knew that. But we did experience a period of time recently when McMaster Carr wouldn't ship to Canada (and presumably other countries) as their fasteners etc could be used to build missiles. "No 1/4-20s for you!"

Had a "funny" case with that also:
I requested 640 MHT simmonds nuts, to use as furnace pannel securing nuts (these nuts can withstand 280ºC without torque loss). These nuts are made in the UK, by Simmonds. Few days later, I received a letter from the US Customs asking why I needed those nuts (I'm on the other side of the Atlantic...). So I kindly responded back stating why, having added the furnace plans. Then I received another letter from US Customs, with a form to complete, where by my honour I stated that I wouldn't sell them to China and that these nuts weren't to be used in any nuclear, armament or space equipment...Then Simmonds (again, an UK company) sold those nuts to me. The entire planet stock was 800 nuts, I
consumed 640 of them.