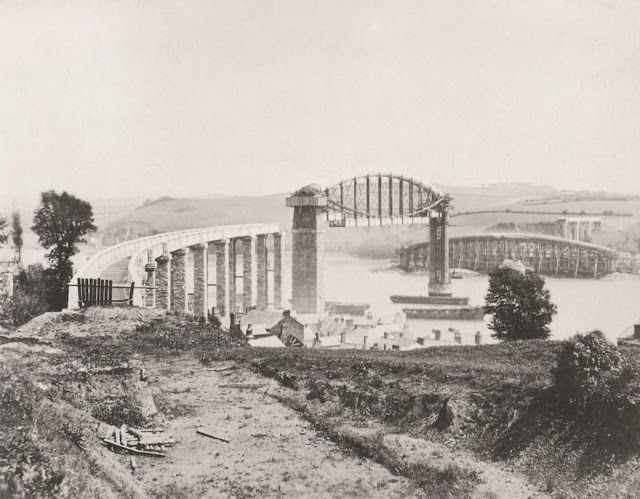 Photograph of the Saltash bridge by Roger Fenton, 19th C photographer.
Fenton was a prominent early British photographer doing mostly landscapes, active from 1851-1869 when he died after a short illness.  Practical photography was only about a decade old when he started. He also was one of several selected to photograph the Crimean war, photos here.
The tubular cast iron structure is considered to be a technological masterpiece and drew large crowds when the 455 foot tubular arches were lifted into place. This railway bridge, now 150 years old, is still in use today. This was Isambard Brunel's last project, he died soon after it opened.
Posted by Mister G at 1:08 PM

Many of the Crimean War portrait photographs are superb, thanks for posting !

Yes! Weren't they? Glad I picked up that $1 book in the discard bin of a small antique/junk store. A little aside is that my gaming kid (who barely got through highschool) started (to my surprise) reciting The Charge of the Light Brigade as soon as he saw the Valley of the Shadow of Death picture. The kid is going to be ok.- even if he spends all his time playing online games...