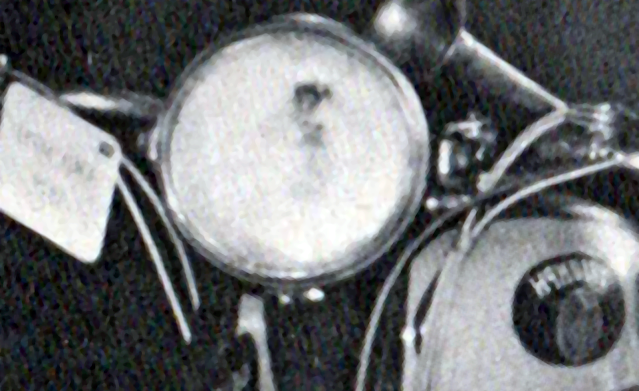 I have squinted myself into a state of moral collapse, and I still can't identify the bike. The nicely enclosed, questionably thought-out magneto drive is so familiar, but ... just ... not quite; and neither can I make head nor tail of the tank badge -- first letter "H"? Prob'ly a flathead (overall, it seems like sidecar guys of the era were conservative and risk-averse = they remained flathead loyalists for long years after OHVs became pretty reliable, sort of). Heavy-duty Druid (?) girder with the side springs. Um. Sorry, I'm mumbling to myself now. Can anybody make the ID?

That very formidable sidecar looks as if designed to convey the rider's domineering mother-in-law, a big unsmiling personage in black wool whose sidelong glance turned pedestians, cart horses, and other motorists to stone. A very 1930s English contraption, in other words.

I think that's the 'Dowager" model... forbidding looking thing, for sure.
The caption in the magazine says the outfit is on display in the Turin Museum, the bike is a 1929 500cc Triumph but the tank badge does not say Triumph. I too strained my eyes with a magnifying glass, then rescanned and tried to enhance it in Photoshop...It might possibly be Hamburg, or a stylized Mc-----. I've added an enlarged and enhanced jpeg so the guessing can continue.

I know why! The image is reversed,look at it in a mirror.It says Triumph. The sidecar is on the wrong side for England which gave me the idea the image was reversed.

It's a mirror image, G.
That's how it looks to me: Hold up a mirror - the "MPH" is perfectly clear. There are enough other smudges to encompass "TRIU"
Backwards or forwards, it's still ugly...

Well! You guys are amazing!Great detective work! Why the heck would someone do that?

Thanks. You guys are great thought thinkers.

Mr G, if your question isn't facetious: inadvertent photo reversing ("flopping") used to happen all the time before everything got digital.

I just wrote, then mercifully deleted, a necessarily lengthy overview of pre-digital graphic composition using phototype. Part of it is explained here --

-- and I'll try to add a comprehensible description if you care enough to ask. I am . I said I'd *try.*

Flopping was a very easy mistake to make, and not always easy to catch before the publication went to press.

Dang, my links got lost again. For the first, Google "Compugraphic." My email address is