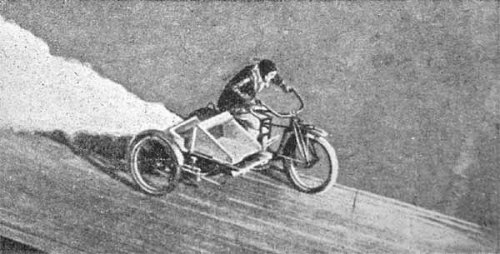 is that smoke? the pic looks scary somehow.

Although mustered out over twelve years earlier, Lt. Brown's sheepskin lined flight jacket still fit well enough for early dawn test rides on his experimental hydrogen powered sidecar outfit. The minimal suspension action on any of the three wheels combined with the lack of maintenance on the dirt roadway to require the clarity of attention that would allow Brown some relief from the the recurring nightmares of daily dealings with the neanderthal-like professors in his doctoral studies. The perennial curse of the true polymath, he was never able to comprehend their lack of ability to see what seemed to him obvious principles and connections in the fields of energy, transportation, even time. But his vision wasn't prescient enough to see that the very road he traveled would ultimately, through urbanization, become the shopping center parking lot that was to be the very location of his greatest scientific triumph.

Fritz von Opel of car fame was experimenting with rocket powered motorcycles in the 1920's. They left a plume if smoke/vapor that looked like this!

I sure was thinking that there's something artificial about the whole scheme -- that the rider, the mystery tricycle, the painterly exhaust cloud, and the background/surface underfoot look like scale models prepared for stop-motion animation -- a commercially competitive technique in early animation ("early" = around the time when the bike would have been new).

But then Joe spoke, and it all came back to me -- the professionally filmed phony suicide of the dastardly "Lieutenant" Hector Brown. (He never served, let alone held rank, and his real name was, as far as can be determined, Santiago Nalgas de Hinchoso.)

Hundreds of small investors were ruined when Brown apparently rode his (apparently) rocket-powered heavy-duty pushbike up the (suspiciously smooth) southwestern flank of Mexico's Volcán de Colima, over the caldera's rim, and into the seething hell below. Perhaps luckily, the lost "engineering marvel" that was his sidecar-mounted giant pasta machine was never replicated; pasta historians now believe that the machine was, like its so-called inventor, a fake and a humbug.

Decades after his January 1916 disappearance, Brown a.k.a. Nalgas was positively identified by Australian intelligence agents operating in western Pakistan. The agents reported that he seemed to enjoy the protection of a regionally powerful warlord/politician, and that he laughed and briefly exposed himself when approached with an offer of covert employment. Their unsatisfactory encounter was almost certainly the last official sighting of the mountebank, horse pimp, and multiple poisoner.

It's all in my book, and available online. Many thanks for the aide-memoire, Joe!

I honestly don't remember where that came from. I think I was flipping through an old book somewhere and phone camera'd it.
It does have an ominous feel about it.. I can't help but feel that Captain Doakes has a part oin this somehow...