We used to make things in this country. #99: John Bertam & Sons, Dundas Ontario

This a lathe that will turn a piece of metal 7.5 ft in diameter and 52 feet long. It was built by John Bertram & Sons of Dundas Ontario. The company existed in various forms from 1863 till 1986 and built a variety of machinery and machine tools over the years. 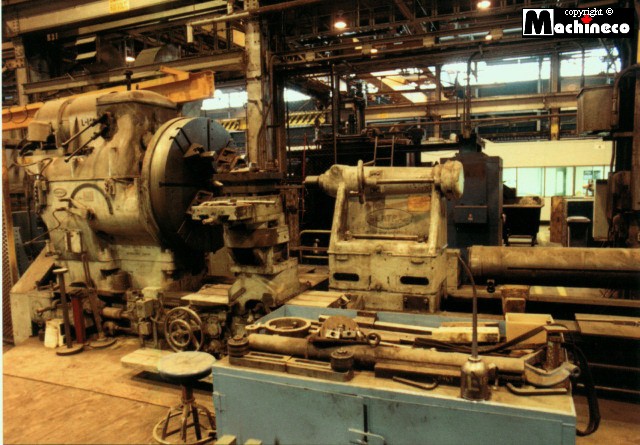 From http://www.machineco.com/ who sold this used lathe;

JOHN BERTRAM & Sons, Ontario, built larger, heavy-duty and precise machine tools until the 1960's. Parts are still available.  Many major American machine tool names of the mid-twentieth century were also built in Canada, and in many Bertram versions, they were IMPROVED on the original design.  Examples are Niles-Bertram, Cincinnati-Bertram & Acme-Bertram etc.  In MOST CASES, the BERTRAM version was better built, often because the improvements were not yet incorporated into the original American design.
Posted by Mister G at 6:14 PM