You meet the nicest people on a Honda! 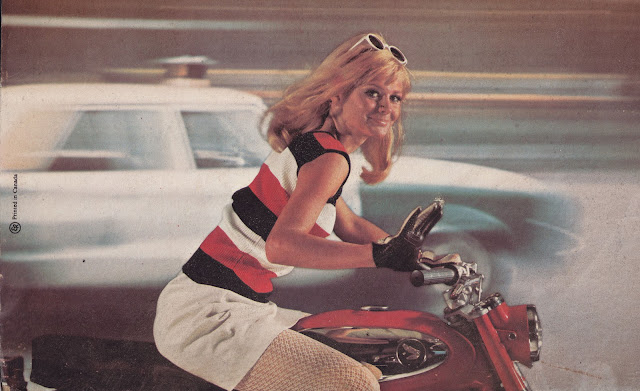 From a 1967 album cover ("I'm a Believer and Other Monkee Hits" by the Living Strings; RCA-Camden).  Looks to be a mid-sixties Sport Cub 65.  This style of riding gear is no longer recommended. (As an aside, in 1951 Bette Nesmith Graham, mother of the Monkee's guitarist/singer Mike Nesmith, invented what came to be known as "Liquid Paper."  She sold her company to Gillette in 1979 for $47.6 million plus royalties.  One year later, Mike inherited most of it.  That's a lot of monkeying around money.) 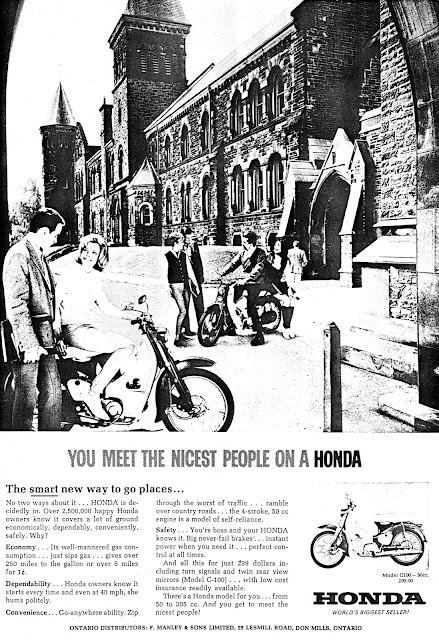 F. Manley & Sons of Don Mills started off importing Toro and Cushman lawn-care machines, but at some point became the Ontario distributors for Honda motorcycles.  Very smart business move.  In one of their 1969 ads for the Honda C-100, it was priced at $299 "including turn signals and twin rear view mirrors." They also boasted, "There is a Honda model for you...from 50 to 305cc.  And you get to meet the nicest people."