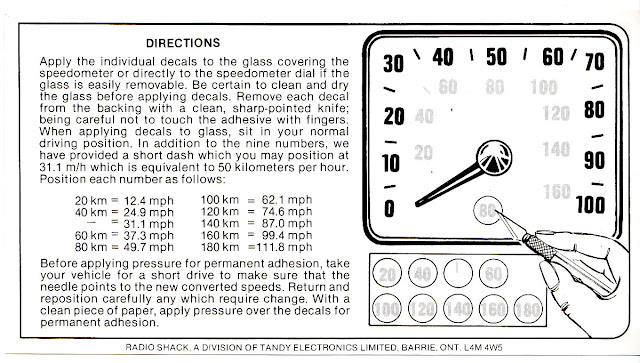 The "Imperial" measuring system was first described as such in the British Weights and Measures Act of 1824.  The Metric system or, as it is known today, the International System of Units (abbreviated SI from French: Le Système international d'unités) has been a legal measuring system in Canada since 1871, 26 years before it was legislatively permitted in Great Britain in 1897.  In Canada in the 1950's, an Act of Parliament defined the pound as 45,359,243/100,000,000 kilograms.  In 1970, a white paper was tabled in Canada outlining the virtues of conversion to the metric system, and this was approved by all leaders in the House of Commons.  Metrication began in 1972, and was accelerated by the Metric Conversion Act of 1975.  An article by Stuart Munro in the April 1979 issue of Rider magazine predicted that the entire world would be using SI system by 1985 "with the probable exception of the Yemeni." The U.S. did not follow suit, except in scientific endeavours where even there resistance occurred.  For instance, the story is told how an early NASA paper circulated in Washington gave escape velocities in kilometres per hour, and one of the top bureaucrats is said to have angrily requested translation into English.  The conversion came back in furlongs per fortnight.

I learned the imperial system as a child and was part of the metrification program in school. I've been working with metric tools all my life and designing parts in metric for at least the last 20 years. Despite that, I still have trouble visualizing a distance- for instance, 136 mm and I wonder how it is that I can instantly know 5 3/8" but can't do the same in centimeters or millimetres. We have all heard the story that an inch was based on the width of the average man's thumb and at times I've wondered if the human-based measure is somehow more intuitive. These days an inch is defined as 25.4 mm. But what is the definition of a meter? Apparently that's a bit more convoluted.
In 1668, John Wilkins proposed using Christopher Wren's suggestion of a pendulum with a half-period of one second to measure a standard length that Christiaan Huygens had observed to be 38 Rhineland or 39¼ English inches (997 mm) in length. A more accurate measure was required and in 1791 the French Academy of Sciences adopted a basic unit of length equal to one ten-millionth of the distance between the North Pole and the Equator to be called mètre ("measure"). From http://en.wikipedia.org/wiki/Metre
That's just the start; over the years the definition of the measure has changed 7 times- till in 1983 the seventeenth CGPM (Conférence Générale des Poids et Mesures) updated the definition of the metre to its current definition, thus fixing the length of the metre in terms of the second and the speed of light:
The metre is the length of the path travelled by light in vacuum during a time interval of 1⁄299 792 458 of a second. Mind you- It is recommended that this definition "be restricted to lengths ℓ which are sufficiently short for the effects predicted by general relativity to be negligible with respect to the uncertainties of realisation".

And that my friends, is why the metric system makes ever so much more sense than inches and feet.
In any event, in the 70's in Canada, everyone was trying to get into the act, and metric converters were available as advertising gimmicks from a variety of sources.  Below, the ones in the Dukes collection. 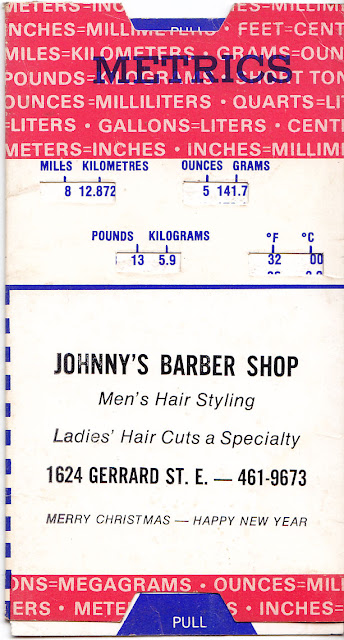 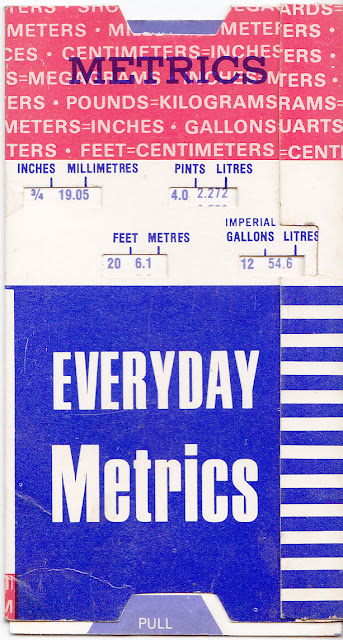 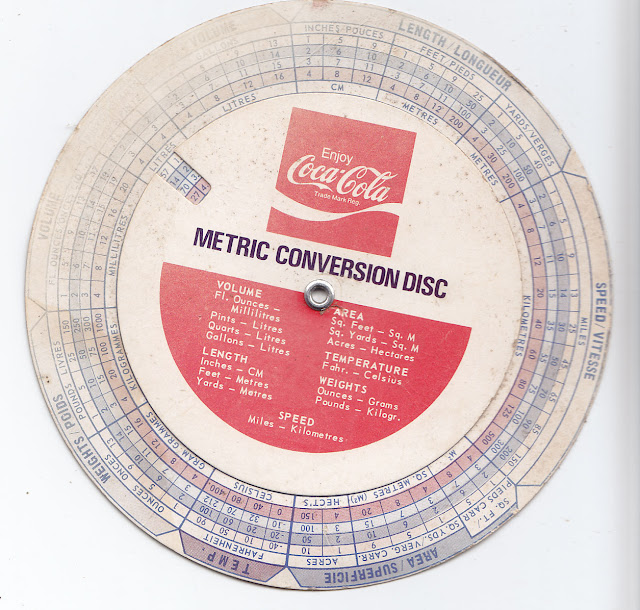 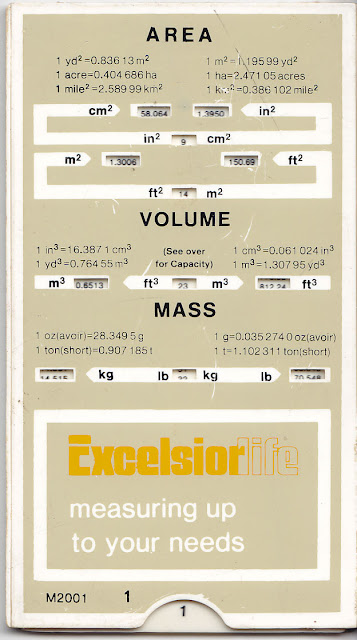 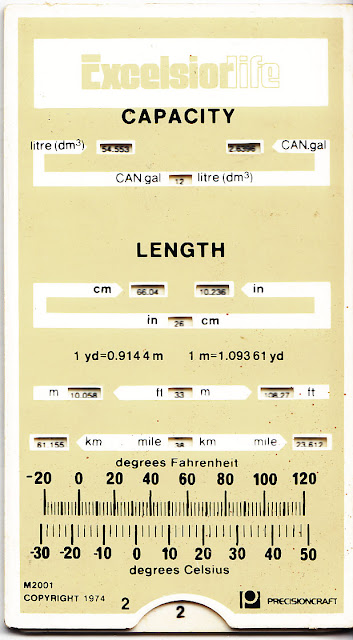 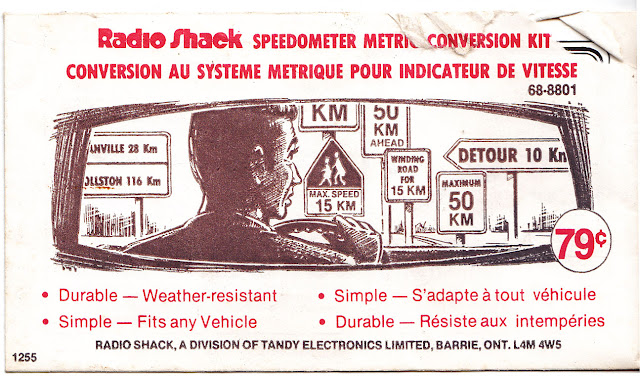 Wow, what a terrific review of a moment in time. I remember the conversion very well. I always thought it was a great irony that the new measures were introduced on April 1.

By the way, I still have one of those Radio Shack speedometer conversion kits.

From Some-Where in the Midwest said...

By the way, one of the reactions to the Metric Conversion Act of 1975 in the midwest states was a newspaper columnist generated movement called WAM! (We Ain't Metric).

the radio shack stickers would date to about 1976-77. Sure, go ahead, just mention the blog somewhere...