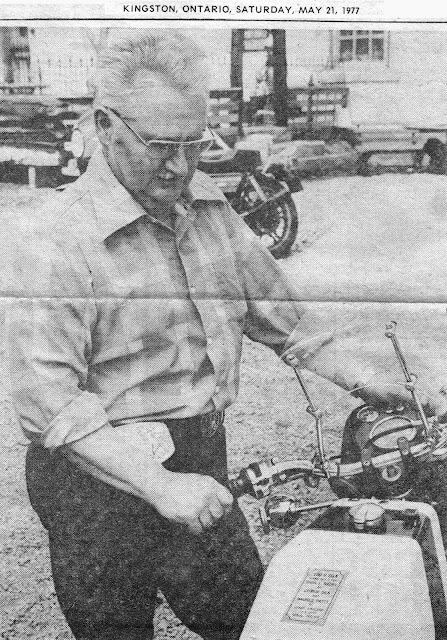 I was first introduced to Tom Riedel back in the mid-1970's by a fellow Norton rider.  He took me out to Tom's shop, where I was stunned by the stable of beautiful and exotic motorcycles and by his voluminous photo albums documenting the 103 motorcycles he'd owned.  At age 60, he was a going concern and he regaled with us tales of travelling on his Moto Guzzi Lemans in Italy, in part with the works team as they prepared the race bikes but also offered to tweak his motorcycle at the same time.

One of my favourite stories had him winding one of his Italian bikes on the twisty road along the north side of Lake Ontario that leads to his home.  It was a lovely spring evening and Tom was letting the bike have its head when he came around a tight turn to be confronted by a police speed trap.  He had only time to register this before he was around the next corner, not before seeing the dome lights start flashing as the cop decided to pursue.  Tom knew he had no where to go, but also was a law-abiding citizen (sort of) so he closed down the throttle and pulled over to the side of the road. Before he even had a chance to pull of his helmet, the cop screeched in behind him. The cop got out of his cruiser and was striding towards Tom when he removed the helmet, revealing his mass of gray hair.  The young cop stopped, stuttered, and said something like, "You must be Tommy Riedel."  Now here was the quandary:  the cops really liked being able to stop by Tom's place to look at his bikes and kick tires. If this young cop ticketed him, Tom might not be so inviting, and the brother cops wouldn't be so happy. So, struggling with these thoughts, the cop said, "Do you have any idea how fast you were going?"  All Tom could say was "Fast enough to get your attention." The cop put away his ticket book, walked back to his cruiser and said, over his shoulder, "Well, act your age."  Tom laughed--he was acting his age.

I got the chance to drop by a couple of more times over the years.  I can't say I was a friend but you didn't have to be close to have Tom share his motorcycle loves with you.  After he passed away, there was apparently an auction.  Sadly, I was told afterwards that some other so-called friends showed up before hand and somehow convinced Tom's widow that Tom had promised them certain valuable bikes, which she apparently let them just walk away with. I don't know if that's true or not, but the person who told me was certainly angry about it.  Some time later, my friend and I rode our Nortons into his yard, where we met his widow.  She told us it was wonderful to hear the sounds of motorcycles pulling in again--she missed that.  She also said that, in cleaning out the remains of his workshop, she had happened upon a cassette tape.  Checking to hear what was on it, she was astounded to hear Tom's voice.  On one of his trips to England, she'd arranged a brand-new British sports car to be delivered to him.  It was a surprise, and the tape was his recording of his pleasure and amazement.  She said something like, "And to think I was prepared to just toss the tape into the garbage."

Anyway, in cleaning out some of my own old files, I found that attached information about him from a piece written in the local Whig-Standard newspaper back in May 1977.  Tom's kind will not be seen again. 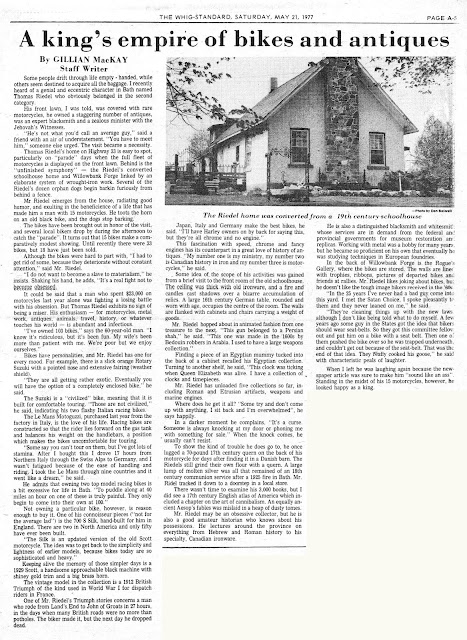 A google search for Tom Riedel lead to one hit:  Blacksmithing Today. As someone who apparently looked after most of the old iron at Old Fort Henry in Kingston, it seems like Tom had a big influence in this area as well.  (The author behind the piece is an example of those interesting folks trained in the professions who find more fulfillment in hands-on artistry.  Matthew Crawford's book Shop Class as Soulcraft is another example.  Click here for a review.  For a more general assessment of this phenomenon, read Matthew Crawford's New York Times piece, The Case for Working with Your Hands.)
Posted by The Duke at 10:27 AM

I'll highlight a quote from the Whig article: "Not owning a particular bike, however, is reason enough to buy it."

I love people like that.
My philosophy also, though I am limited by garage space. Or lack of...
Unfortunate that I'll never meet him, he must have been interesting

I'm so glad you published this. Last year ...I started researching Tom. I own a 1974 BMW of his..and had restored the bike in 1994...rode it for a year. I found it in a barn in Harrowsmith where it had been ...for 20 years . A fellow I met from Montreal recognized Tom's identifying plaque on the rear fender ...made of white metal... placed under the seat. There were several hand made tools in the BMWs tool wrap. Fascinating. Im still hoping to come in contact with someone who remembers the approx 1975 eta of his bike addiction. The Belgian issued BMW I have of his is for sure one with a great story. I got that vibe without even knowing any of this relative history from the bike and spent a lot of time bringing it back to beautiful I still carry this bike through the world just as a memory of Tom or Tommy as his friend called him. It was nice to.finally see a picture of him. Thx. A guy in Almonte Ont.

I was introduced to him about 1978, I was riding my Water Buffalo. His comment was "I'd own one of them if it wasn't so ugly". He was a very entertaining man. About that time he owned a SFC and 3c Laverda, a Guzzi Lemans, and a 900 SS Ducati- all motorcycles that were beyond desirable at the time. Lots of fun stories about him, most of which I heard second or third hand....
Anyone with additional stories,, let's hear them!