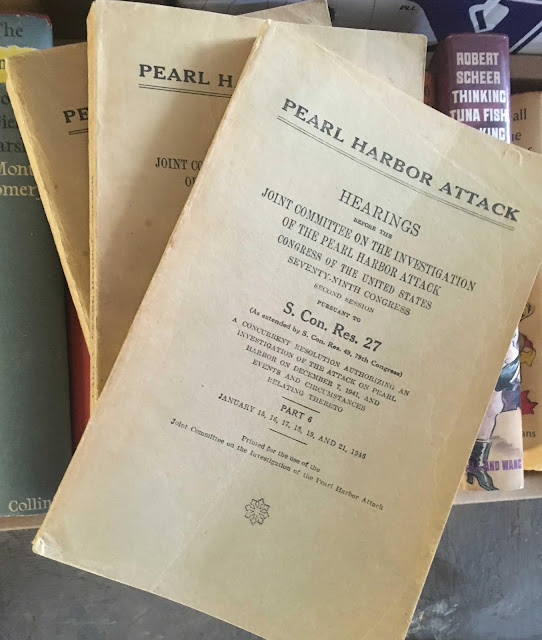 I was at a book sale a few months ago, thousands of them, $2 per book. One of the offerings was this title. I was tempted but... does anyone have enough spare time to wade through something like this? Anyways it's online if you need to read it...
Posted by Mister G at 12:41 PM

There were nine official inquiries into the attack, with the 1945-46 congressional one being the last until a tenth done in 1995.

Quite a lot of semi-underground conspiracy theories going around — see https://en.wikipedia.org/wiki/Pearl_Harbor_advance-knowledge_conspiracy_theory

Robert Stinnett's book, Day of Deceit is worth reading if you're curious; read the paperback edition as it has FOI updates since the hardcover was published.

Even if FDR didn't have advance knowledge of the attack, it got the US into the war as he had wished for quite some time on the side of Great Britain.

This is also an interesting memo: https://en.wikipedia.org/wiki/McCollum_memo

Thanks for the links, I've dabbled in that direction and it's a rabbit's hole for sure.

Another excellent book on the same subject is "A Matter of Honor: Pearl Harbor: Betrayal, Blame, and a Family's Quest for Justice", which is how Admiral Kimmal was made the scapegoat for the disaster.