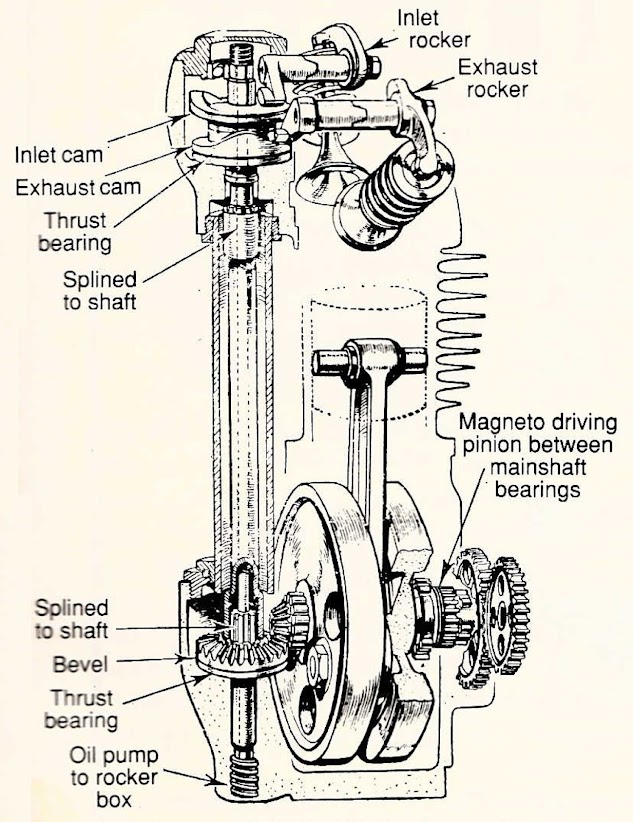 There have been a lot of ideas over the years to open and close valves, this Chater Lea design of the early 1920s, involved flat discs in the head driven by a vertical shaft and bevel gears from the crank.  The rockers ran over ramps machined into the discs. Looks nice and it is interesting, but would the design would offer many advantages over the classic cam with lobes?

Chater-Lea started in 1890 making bicycles, but within a few years was specializing in malleable castings and forging for the motor industry, and soon was making a sorts of proprietary finished parts. The temptation to build complete motorcycles was too great and in 1908 their first motorcycle was introduced. World War 1 saw the company making military equipment but after the war they resumed their motorcycle production using Villiers and Blackburne engines. They also were working on their own engine designs and in 1925 introduced this new 350cc engine.  Although the motorcycle did well in competition, they didn't pursue the idea with much enthusiasm and only about 550 were  built before the company got out of the motorcycle business in 1936.

If I'm following the motion correctly, this is a desmodromic face cam engine. I don't think 'unique' has a better illustration.

And my spellchecker doesn't recognize 'desmodromic'. Clearly not Italian.

I don't think so, look at the top disc, there is a hill but not restriction on coming back down the hill?

Nope, not desmodromic, the cams open the valves and the springs close the valves. Don't be confused by the proximity of the two face cams; one is for the intake rocker and the other is exhaust.
As for efficiency gains this design does eliminate one set of bevel gears and two support bearings for a conventional transverse camshaft. So, freeing up some (admittedly small) power loss and removing two potential failure points in a race engine. The disc cams and their shaft would have to be pretty substantial to support the cantilevered pressure of the rocker followers though, and the rockers themselves look like they might carry a little more mass to be controlled at high revs.

>> would the design would offer many advantages over the classic cam with lobes?

Diminution of the reciprocal weight and of the built-in (though maybe negligible?) slop that come with pushrods. Maybe a tad (again, negligibly?) less fiddly (= expensive) to machine and selectively assemble than a tower-gear OHC such as the Manx and Ducati, et al. And possibly easier to make a face cam than the kind we think of as "cam-shaped"?

But yeah, even if those ignorant guesses are correct, the engine is still a gorgeous example of "Why bother?".