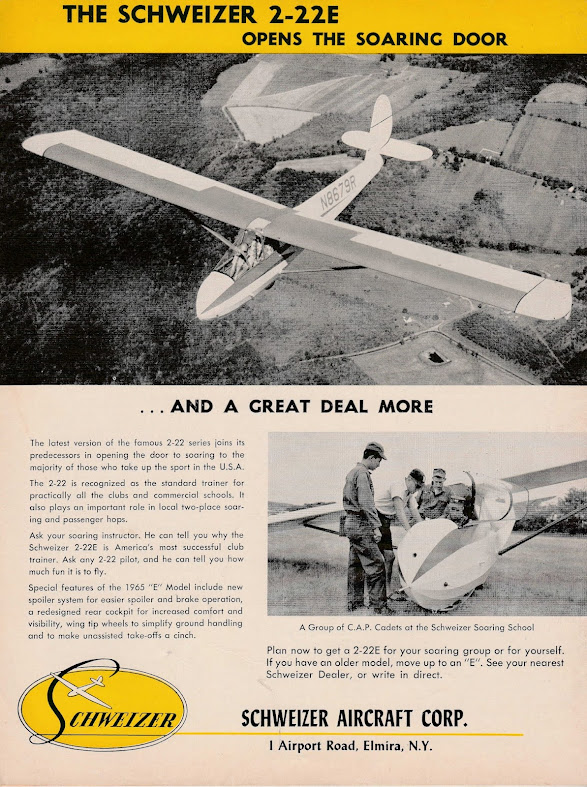 Ernie and Paul Schweizer built their first glider in 1930 when they were teenagers, they started the Schweizer aircraft company to build them commercially in 1935. Their timing was good, in the years leading up to WW2, the American military started a glider program and became a large customer. The company built them at a rate of one a day. This program, along with the availability of war surplus aircraft formed the basis for the gliding community after the war. A third brother Bill joined the company after graduating as an industrial engineer and helped the company become a mass production facility. Schweizer was the oldest family owned aircraft company when it was sold in 2004.
The 2 seat sailplane in the ad was produced as a development of the wartime model and was manufactured from 1946 till 1967, just one of dozens of sailplane models made by the company. Though the Schweizer brothers branched out in other directions, sailplanes remained their main interest through the years.
In the 1950s Grumman contracted Schweizer to construct their new cropduster, the Ag-Cat. 2500 were built for Grumman before Schweizer bought the design in 1981. The Schweizer Ag-Cat was produced till 1995, before the rights were sold again.
In 1986 they acquired the rights to the Hughes 269 helicopter and starting building their version as the Schweizer 300,  developing it into the models 330 and 333.
Schweizer was acquired by Sikorski in 2004 and closed in 2012.
More here.
Posted by Mister G at 9:48 PM

Has anybody here flown, or flown in, a glider? Seems like it would be a lovely and prob'ly addictive experience.

I never have, though if someone offered me a ride... We bought a ride for my son when he was 16, it was a selfpowered unit, didn't take enough note the make etc...
He thought it was ok.... Arghh. kids these days.

Yep and in one of those! For a powered pilot I can say I did not really enjoy it, but plenty of pilots do. Takes a lot of skill but I like going places and your not really doing that in a sailplane. Endless circling in thermals to gain altitude was not for me and the old aluminum birds are very tin canney inside, both in feel and sound. I would encourage everyone to take a ride in one for the experience, maybe you will love it!

With much less to compare it to than your background gives you, I'm pretty sure I would love it. Disappointing to hear that they're very noisy. In my imaginings, the buffeting wind is about all there is to hear.

As a kid I really dug coaxing one of my ruinous old motorcycles up to a high speed (w.i.s.f.t.m.)* and disengaging the clutch, for the sensation of speed and silence (except for etc.).

Coasting down a hill on a motorcycle...engine off.

Let be clear, the old aluminum birds, vibrate and produce tin can sound vibrations in turbulence, which thermals produce, so not pleasant to me. The new composite birds don't do that, plus once you are in cruise flight all that goes away and you do get the pleasant sensation of wind only sound. But you are constantly looking for thermals or else your going to land.