From Tubal Cain, "Metamorphosis:  and how a 'FENN' lathe made a convert!"  Woodworker, April 1973. 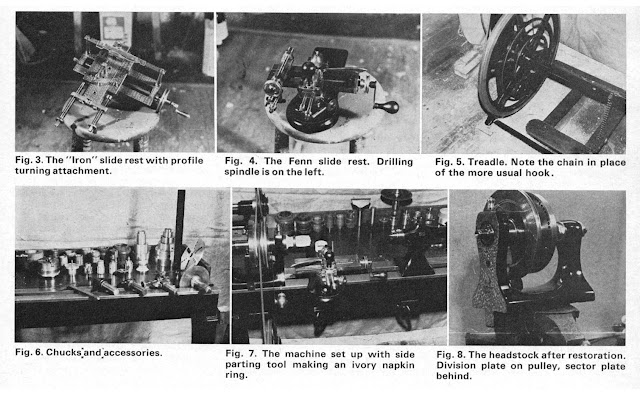 "Tubal Cain" was Tom Walshaw, a professional engineer and frequent contributor to The Model Engineer.  (Another prolific contributor to this magazine, Edgar Westbury, was the inspiration for the hero in Nevil Shute's novel Trustee from the Toolroom.)  With regards to the Fenn lathe, Tubal Cain reports:

"It is difficult to know where it all started.  My father was an engineer, as were most of my relations and not a few ancestors.  By the age of five I had assisted in the driving of a locomotive; at ten, I had sat inside the cylinders of a 15,000 hp steam engine while it was being rebored, and from the age of 16 I had spent at least half my time using a very wide variety of machine tools until I got my first job as an engineer at 21.  I think it must have been in 1935 that I got my first lathe--a 35-shilling 'Adept'--and started making little engines for myself, as a change from designing them for my employers.  Since then my workshop has 'growed and growed' and now houses several tons of machinery and materials.
During all this time, working in wood was anathema.  My father, himself a keen woodcarver, used to say that I had only to pick up a chisel for its edge to turn, and it is true that, despite a spell in the pattern shop in 1931, I was never able to come to terms with a material so lacking in homogeneity."

This all changed when he got the chance to buy a Fenn (although he was aiming for a Holtzapffel).  He says, "Both the headstock pulley and the bed were endorsed 'Joseph Fenn, 105 Newgate Street, London.'  This fixes the date of the machine as between 1823, when the firm's name was changed from 'Samuel' Fenn, and 1873, when the business moved to Long Acre.  The firm was a very old-established supplier and possibly maker of horological instruments, dating back supposedly to at least 1665.  They went out of business about 1914."