Below, a photo of an early Craftsman wrench above a later version.  Interesting that the earlier one combined 7/16" and 9/16" openings.  Note the considerable difference in width of metal around the openings of the earlier and later wrench. 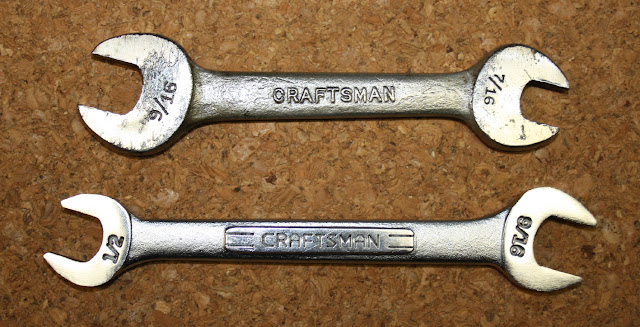 Below, a composite photo showing the 7/16"  and 9/16" ends of a later wrench superimposed over an earlier one.  Almost looks like an ad for a diet.

I don't think the smaller size of the later wrench is due to advances in metallurgy.  More likely, it represents the fact that machines today tend to be smaller, with less room around the parts to swing a wrench, so wrenches are smaller.  Look under the hood of a 1950's car and you'll see that back then there was practically room to climb in beside the engine.  Compare that with an engine compartment today.
Posted by The Duke at 3:49 PM