Found this in my collection of old knobs and hand wheels I keep around for fixing stuff. 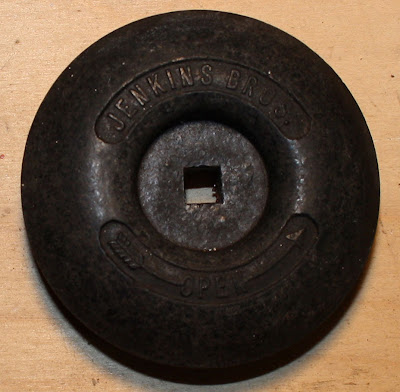 Turns out it's an old valve handle, probably for a hot water radiator.
Founded in 1864 in Bridgeport, Connecticut, Jenkins Brothers were a US manufacturer of valves and mechanical rubber goods and were also the US agents for Moncrieff Scottish Gauge Glasses. Jenkins took over the agency for Moncrieff from Rogers in 1925 and continued until about 1939.  They also apparently had a manufacturing plant in Lachine, Quebec.  The company was bought out by Crane for the sake of the Jenkins patents, and the Lachine factory was ultimately abandoned.  For pictures of its sad state and final demolition, visit the Urban Exploration Resource.