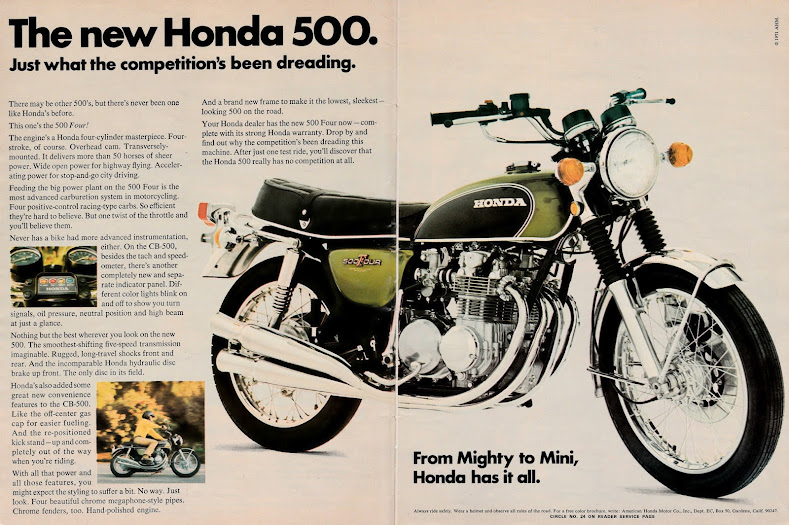 Spring 1971, we heard that this bike was at a nearby dealer- Ramsay Hardware in Napanee, Ontario to be specific. Dealerships were different in those days, the motorcycle section of the store was in a back room of the ancient hardware store with the creaky wooden floors. There was the bike in the middle of the floor, leaning on the sidestand. Awestruck, we circled it.

"Want to hear it run? the owner asked. He hit the button and there it idled in the small echo-y room. After a minute or two, he shut it off. "Sounds like a V8", he commented. We at 16-17 years of age had no answer.

Which brings me to this. Remember this cover? June 1971? Sure, the bike was awesome but the blonde! 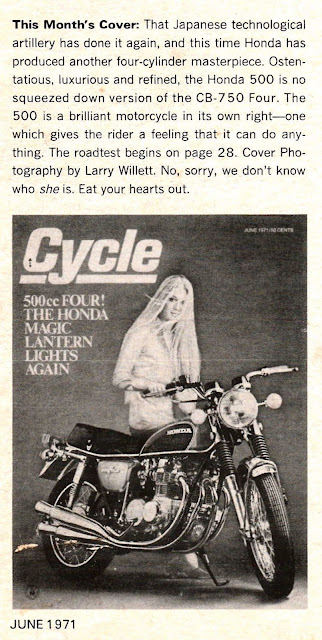 Who she was was Mary Cathleen Collins, an aspiring model and actress. You may remember her from a later movie named "10"? Later known as Bo Derek. But she was "ours" first :-) 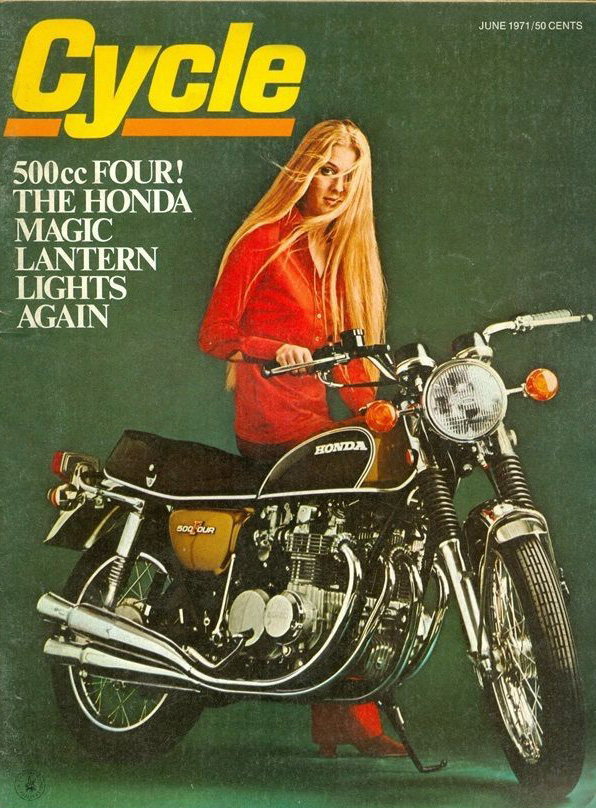 I got a set of those 550 Four shock off eBay a few days ago for no reason except that they were super cheap. I didn't know that was Bo Derek.

I bought one in 1972(a 71 model) really enjoyed it although my ownership was fairly brief(no money of course). A few years later I bought a used 750 and had that for about 8 years until I decided bikes were no longer us.

My first bike was a brand new '73 CB500 in orange metal flake (I wanted the candy gold, but it was unavailable in '73). Rode it out to Tofino and camped on the beach, good memories.

I lusted after that bike for about 30 minutes, I still like the styling of the pipes. My focus changed to the 400F.. I have never owned either one.

Yup, beautiful pipes; and the first-year (I think) green-and-black paint knocks me out to this day. Something broader though, the proportions overall, were less brutal/more handling-centric than the 750. Just my seemingly inexhaustible two cents' worth.

I think this is the bike whose short range was lamented by Peter Egan.