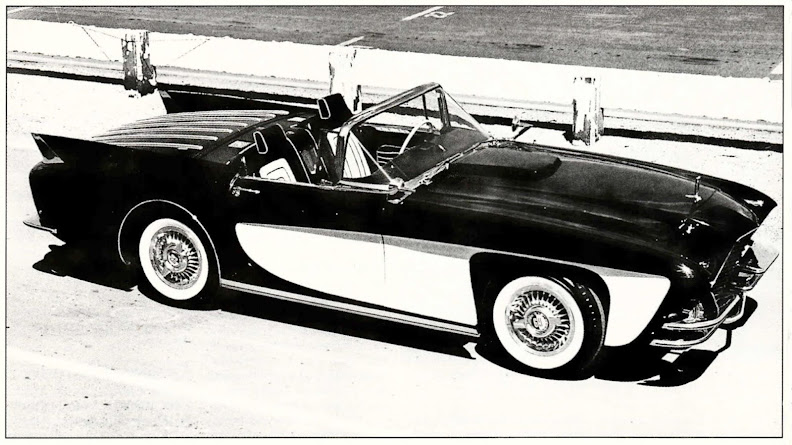 In the early fifties brothers Jim and Ed Gaylord, sons of the man who had invented the bobby pin, decided they should build the world's most spectacular cost-no-object car. They commissioned Brooke Stevens to style the body and the car was shown at the 1955 Paris Motor show. The car, with strange radical front fender cutouts, resulted in negative feedback and a refined design (above) replaced it. Is this where the Corvette got its scalloped sides?

The car was supposed to be a blend of American styling and European sportiness. It was powered by a Cadillac V8 and was to be manufactured in Germany by the company that had built Zeppelins. The partnership did not work out, only four prototypes were built and the project was abandoned.

Whoa nellies, love them strange radical front fender cutouts (on Mk.I)! Actually it made me a little seasick to behold them. Thanks, Mr. G.

"Gaylord Gladiator" is a name that should have thundered down the generations. It cries out for some new rich guy to apply it to the World's Finest Car (2021 version).

Seems the Gladiator got a thumbs down in the arena...

Your comments reminded me of the movie Ben Hur, but that didn't come along till 1959