The destruction of the engine of the "City of Paris" 1890 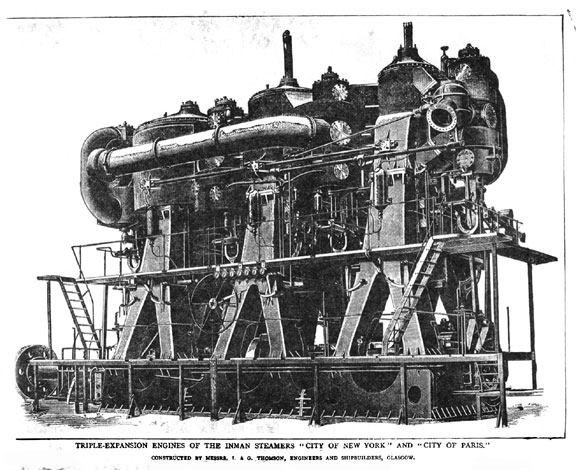 The steamships "City of New York" and "City of Paris" were built for the Inman and International Steamship Co.'s Royal Mail service, prior to 1890. These ships had twin screws, driven by two separate and distinct sets of triple expansion engines, together capable of developing over 20,000 indicated horse-power.

The following is an account of an accident to the starboard engine of the "City of Paris." This account was taken from the May, 1890 edition of "POWER" magazine.

"At half past five on the evening of Tuesday the 25th of March, the steamship "City of Paris" was about 216 miles from the coast of Ireland, running at full speed. There were in each engine-room three men, one upon each platform. The man on the top platform felt the tail rod of the low pressure engine, and went forward. He had not gone five steps when the whole low pressure engine fell to pieces. In a few  seconds this great engine, standing 45 feet high, was a heap of scrap. A represen­tative of THE ENGINEER (English) was allowed to view the wrecked engineroom when the ship was brought to the dock, and from that paper we reproduce the accompanying engraving showing the star­board engine-room as it appeared at that time.

The result of that examination was to show that everything that could be broken was bent, or twisted, or distorted. But the ruin is not confined to the engine room; the great screw shaft, 21 in. in diameter and over 100 feet in length, has been ripped out of its bearings from one end of the screw tunnel to the other and then dropped back again. All the cap bolts were smashed and a great rent is torn in the bulkhead where the shaft passed through it. The half-inch steel plate has been dented and buckled like a bit of paper; all the horse-­shoes were torn out of the thrust-block and scattered over the engine room. The destruction of the condenser was followed by an enormous rush of water into the engine room.

The editors of  THE ENGINEER prefer to reserve all expression of opinion in regard to the cause of the breakdown, their article mentioned, however, that experts in Liverpool are satisfied that something did not give away first in the engine, but that the succession of events was as follows:  The brass liner on the tail-shaft burst; then the lignum vitae strips were torn away, bringing metal to metal; then the tail-shaft ground away the liner in the steam jacket; then the steel shaft ground away itself and the bracket and the shaft dropped; then the continual bending action which took place resulted in the shaft breaking just where it came out of the steam tube; then the engine raced with the result shown by the engraving. At present they neither accept this theory as sound nor dispute its accuracy. When everything has been collected out of the ship and nothing remains to be discovered it will be time enough to express an opinion.

The 'engraving' talked about in the above description is a steel engraving showing what the engine looked like from a point above the high pressure cylinder. This engraving has the clarity of a photograph." 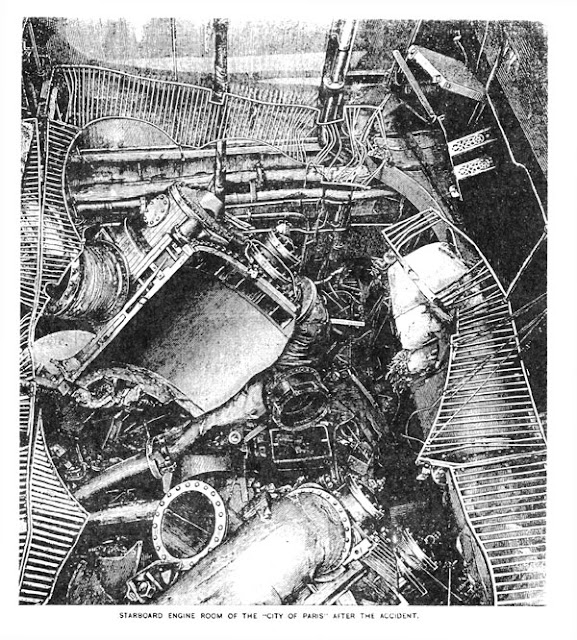