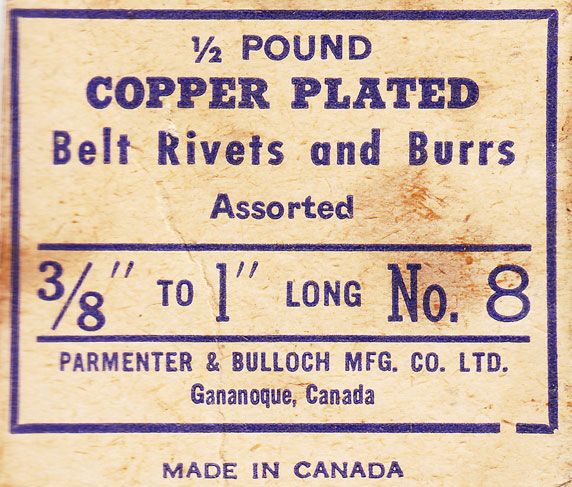 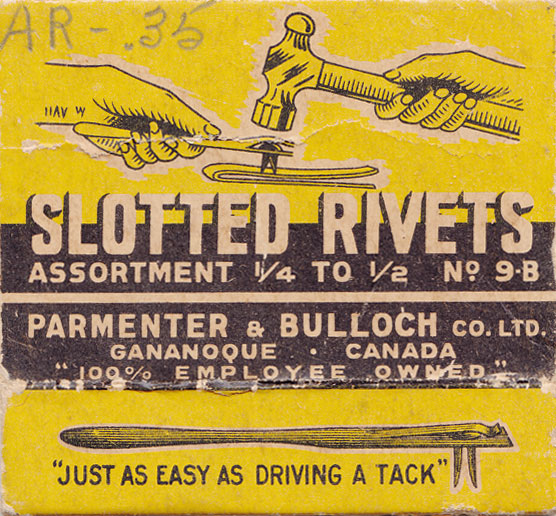 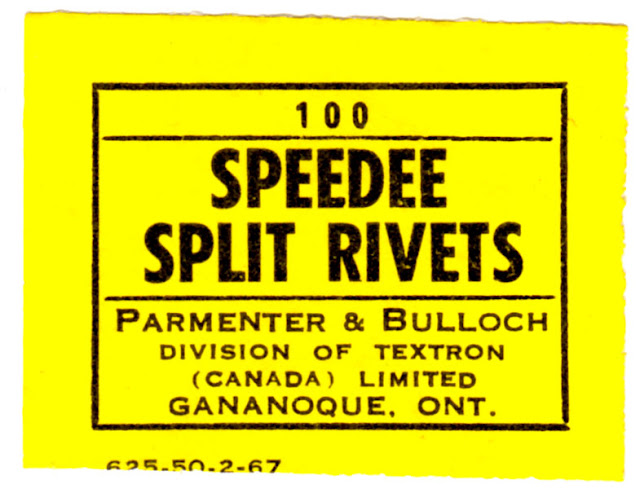 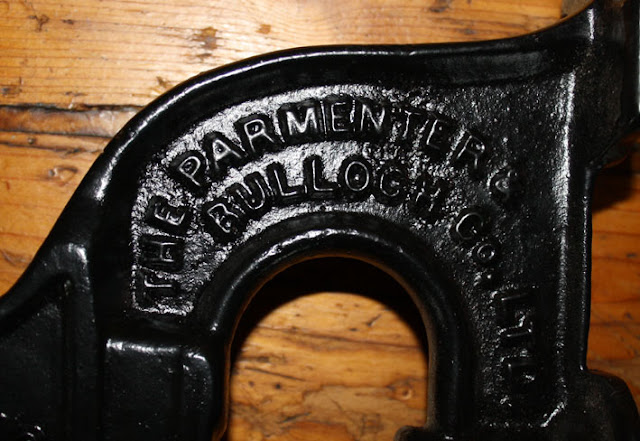 Below, a rivet making machine I photographed in the Kingston ReStore: 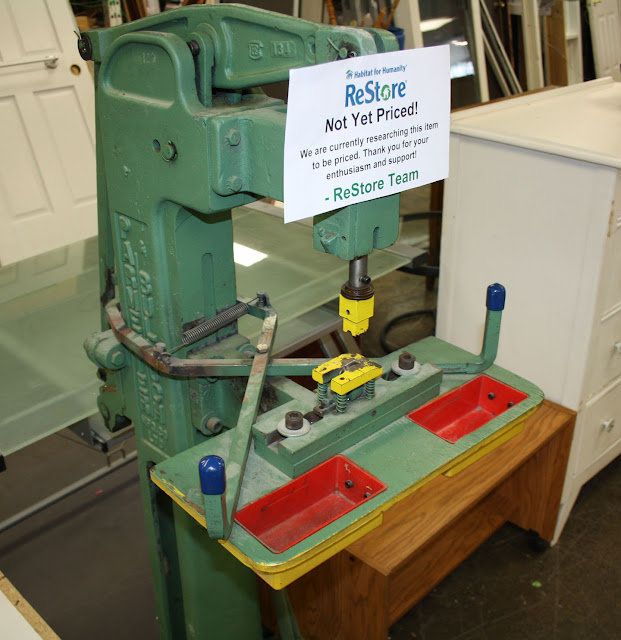 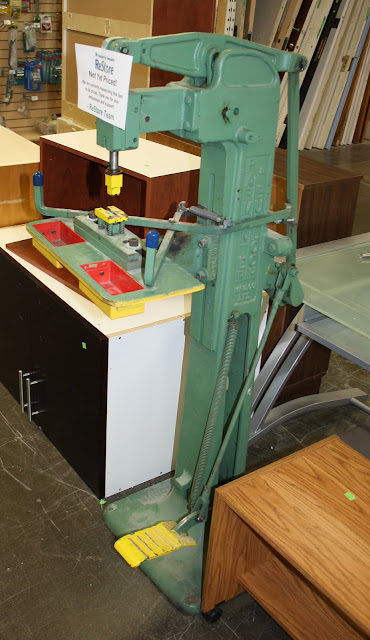 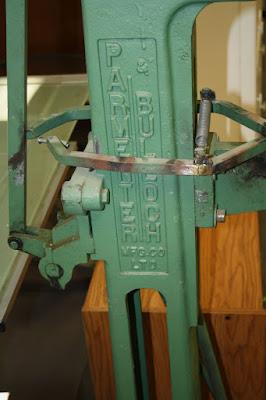 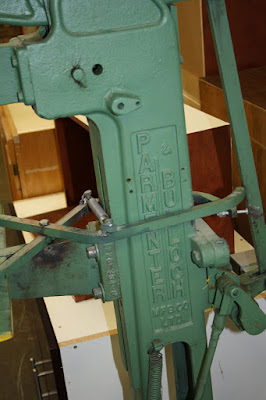 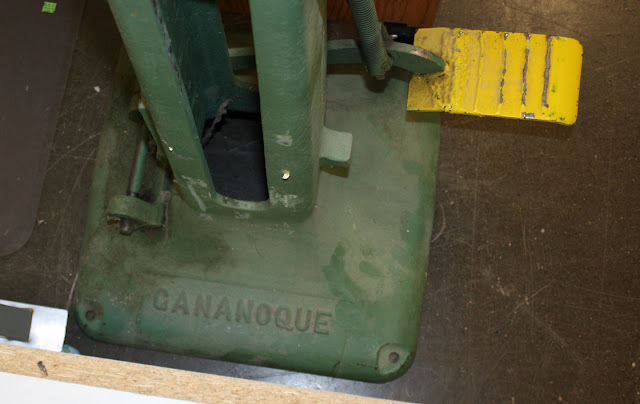 Parmenter & Bulloch began in a small stone building on the west bank of the Ganonoque River in 1864, using the river to supply water power.  When the river was low, machines were often turned by hand.  At the beginning, they made "kettle ears" and washers, but in 1876 they turned to solid rivets and in 1884, tubular rivets.  They also made overshoe buckles, ice grippers, sweatpad hooks (for horse collars) and button hooks.  Steam power eventually replaced the water wheel, and the manufacture of rivets became the company's sole product.


They pioneered the use of rivet setting machines in Canada and installed electrical generators in 1918, not connecting to the city's grid until 1937.  In 1946, the employees bought the company, rather than see it sold to American interests and moved south of the border. However, six years later it was acquired by the Townsend Company out of the U.S. and then, in 1958, it became part of the Textron Corporation.  At some point, the factory in Ganonoque was closed.  All that now remains is the Athlone Inn in Ganonoque, built in 1877 for Charles Leopold Parmenter, co-founder of the firm.  It is now a bed and breakfast.

(The post above was originally #89 in our "We used to make things in this country" series.  For some reasons, it is attracting a bizarre number of visits, probably from bots, so I've renamed it and posted it with a different title to hopefully put an end to this.) And I've renamed it again! Mr G  (2018)
Further info from a reader, "Sherry"
The first two industrial deaths in Ontario to involve cadmium occurred in March 1937. Two men who worked at the Parmenter & Bulloch rivet plant in Gananoque were overcome by fumes from a cadmium annealing or electroplating process, and died in a matter of hours. Around this time Dr (Edwin James) Bracken is reported to have had some questions after a patient died of what appeared to be pneumonia, because there had been two other deaths diagnosed as pneumonia and all of the men worked at P & B where the new method of cadmium plating was being tried. His investigation resulted in the widows being paid a pension by the company. 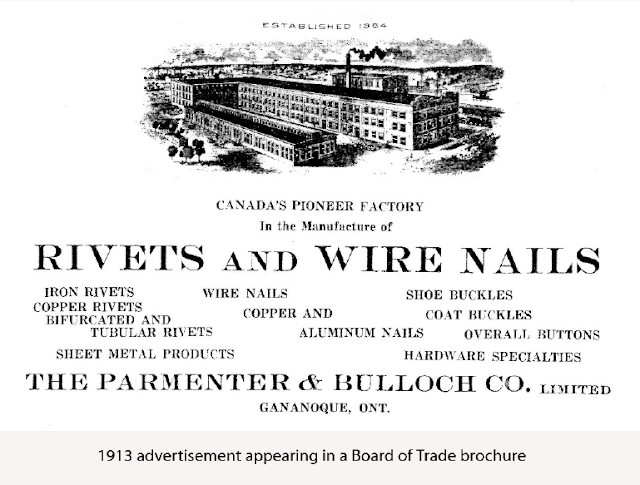 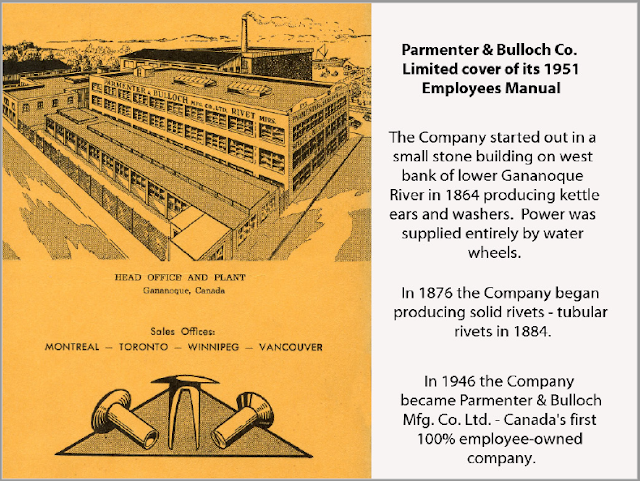 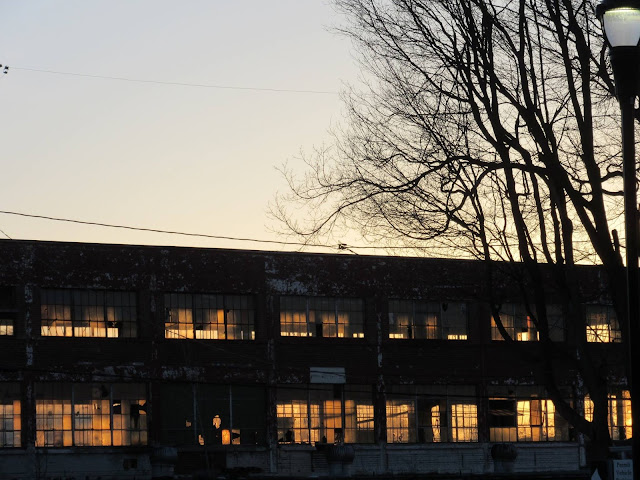 My Great Grandfather worked there. Apparently he was a well thought of employee while he worked there before the war. Sadly he was KIA in 1915 but his name remains proudly on the Gananoque Cenotaph William Chester.

I found this site because I was in search of anyone still making such slotted rivets. I still have a box of them, from my father, the same box as the one in your pictures. They make repairs easy on items like leather belts. I wondered what happened of this company, so thanks for the story. It's sad to see all these canadian companies being gobbled by bigger ones just to be shut down later on. Gee perhaps I'll make a stop at Gananoque to see that inn.

You can now see the rivet machine from the Kingston ReStore at the Arthur Child Heritage Museum of the 1000 Islands in Gananoque.

Hi, I am looking for information on what happened to the Parmenter & Bulloch building. I believe my Grandfather worked there. He was involved in an explosion where 1 person died, my grandfather was injured. Apparently there is a plaque about it with his name on it. I'm trying to get a picture of it for my father. I believe it happened in 1940

Hi Shannon, I've found some addition information and will add it to the post. Also; The heritage property report for the repurposing of the P&B buildings. https://www.gananoque.ca/sites/gananoque.ca/files/meetings/supporting-materials/Riverstone%20Development.pdf

Thank you!! My 2nd great Grandfather was William Bulloch but I only just found out through DNA! It's been exciting learning about my family, but this has been the coolest find yet lol!

Textron Industries, the last incarnation of P&B, build a huge new factory on Hwy 32 (Stone St.) near Hwy 401. It was abandoned (Textron moved south) and is now a huge Home Hardware store.

I’ve been in that store! And wasn’t aware. Thanks!

My grandfather, Oscar Sheets died of Cadmium poisoning at P and B in 1937. He was a foreman and rushed to help a co-worker who was in trouble.