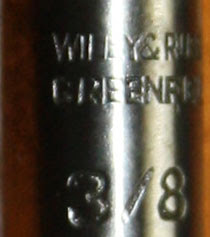 I picked up a collection of old taps, and one of them was stamped "Wiley & Russell Mfg Co., Greenfield, Mass."

Wiley & Russell was established by Solon Wiley and Charles P. Russell in 1872 to manufacture taps and dies. Russell was the nephew of the founder of the J. Russell Cutlery Company.  When the cutlery firm moved to Turners Falls, Wiley & Russell were able to acquire their old factory on the Green River.  As the firm prospered, it expanded its product line to include tools and machinery for farriers, blacksmiths and wheelwrights.  They produced a line of drilling machines under the "Green River" trademark.  (John Russell Cutlery also used the "Green River" name for its knives, especially Bowie knives, which enjoyed a high reputation in the "old west." Parenthetically, John Russell is known as one of the most important innovators of the American System of manufacturing, which emphasized production methods leading to easy parts interchangeability.  The John Russell Cutlery Company survived into the mid 1930's.)  As for Wiley & Russell, it was was acquired through a hostile takeover by the Wells Brothers Company in 1912 to create the Greenfield Tap and Die Corporation, for a time the world's largest manufacture of taps and dies.  The use of the Wiley and Russell name was reportedly discontinued after 1916, but I find it hard to believe that the tap in my possession is that old.  If so, it's very nice for a thread cutting tool that's almost a century old.
Posted by The Duke at 10:20 PM

I have a set I would like to know its worth. It is New lightening screw plate for pipe patented adjustable dies 5 pc set

This set is a willey & Russell greenfeild mass mfg

Could you send a picture to Gerald#vanwyngaarden.ca?

I've got a woodland Russell hand crank drill press. "the green river no. 2"what is it worth?