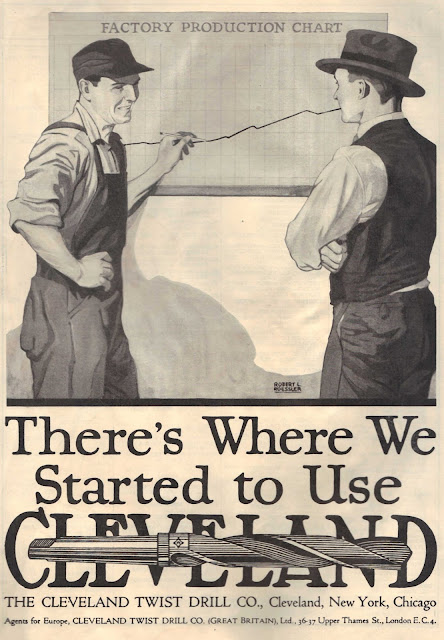 From  http://www.factorylink.com/cleveland.html
The Cleveland Twist Drill Company was founded in 1876 by Jacob D. Cox, Sr. He used $2,000 borrowed from his father to buy a 50 percent stake in C. C. Newton’s small twist drill factory in western New York. Later that year, he moved the company to Cleveland, Ohio. The ad above is from 1922.


The 1968 merger of the Cleveland Twist Drill Company and the National Acme Company created Acme-Cleveland Corporation. Although Cleveland Twist Drill was Acme-Cleveland’s founding business accounting for two-thirds of overall sales, it was sold in the fall of 1994 to longtime rival Greenfield Industries Inc. The company is still around today and the Cleveland name is still used, though there doesn't seem to be an Ohio connection anymore.
Posted by Mister G at 9:04 AM