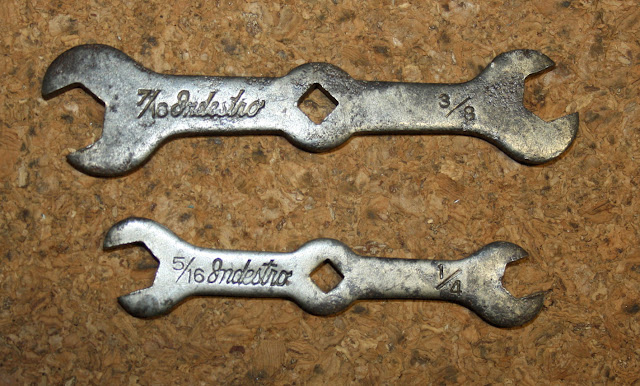 Above, two Indestro examples of what are commonly called "Nut and Tap" wrenches.  The centre hole served two purposes.  First, it could be fit over a tap to act as a tap handle.  Second, a bolt inserted through the holes on a collection of such wrenches would hold them together in a set.

Below, a stamped open-end wrench also made by Indestro.  The interesting feature is the 3/8-24 die in the centre.

Below, from the 1935 Indestro catalogue:

I've got almost a full set of the Indestros (I've just finally turned up the 7/16- 20 and I don't have the "attractive carton."). These were made from hardened high carbon steel, and I still find a use for them as thread chasers.

Below, one made by the Canadian tool company Gray, with a 1/4-28 thread die:

Finally, a 5/16-24 die in the middle of a "Wizard" wrench made by the Wakefield Wrench Company:

I find it curious that every one of these wrenches I've stumbled across has a die only for the fine thread series.  Possibly, fine threads were more likely to be damaged?  Anyway, an interesting idea for a wrench that no longer seems to be offered by tool makers today.