Above, the two rather battered examples of individual wrenches in my possession.  In it's day, if you can believe the advertising copy, it was "The best selling, best valued tool in the world."  Hard to imagine.

Interesting to see the change in logo between the first and second wrenches above.  The first wrench has an alligator jaw, while the second has fractional A/F measurements, suggesting it was a later version. 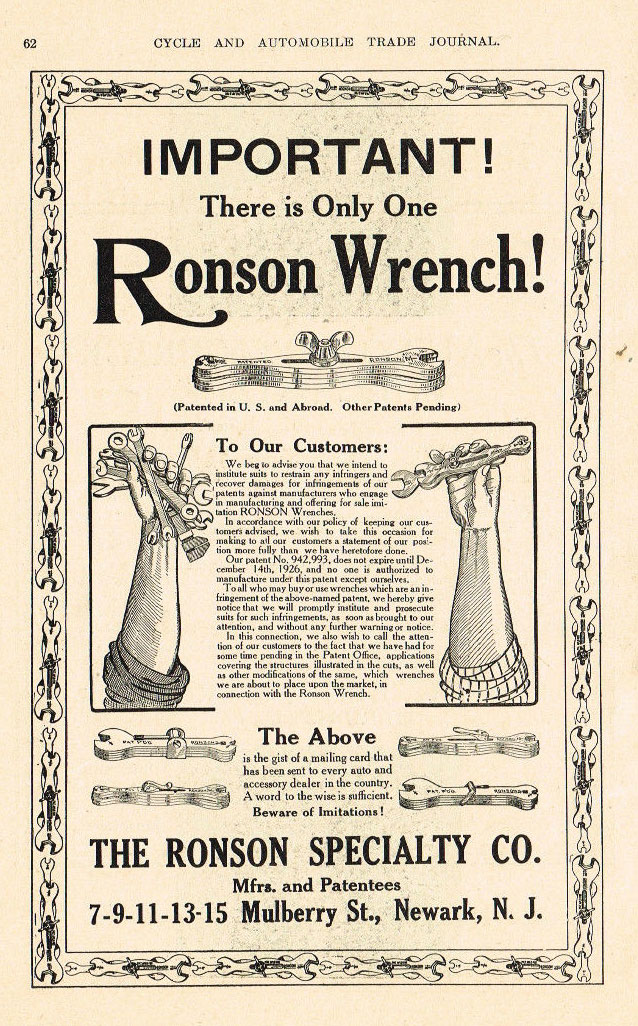 The wrench was patented in 1909 by Louis V. Aronson of Newark. He was quite prolific:  his patents include a design for a toy machine gun, book ends, soap-dispensing shaving brush and, most importantly, a "pyrophoric" cigarette lighter.  First patented in 1910, this became, logically enough, the famous Ronson lighter, produced at his Art Metal Works on Mulberry Street.  In 1933, he hosted a banquet in Newark for Albert Einstein.  "And to think that I saw it on Mulberry Street!"

(In my neck of the woods, a generation or so ago, wooden matches were jokingly referred to as "Abitibi Ronsons", as Abitibi was the biggest match manufacturer at the time.  I've also read that, during World War II, British soldiers used to refer to Sherman tanks as "Ronsons" because, under fire from a Panzer, they "lit first time, every time." This may be bunkum:  see The Tank and AFV Blog.)