I recently picked up a nice German-made rotary rasp in its original packaging: 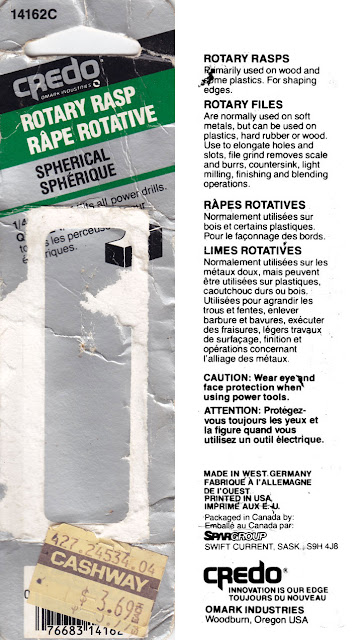 It still bore its Cashway price sticker, gone since 2000 when its 66 Canadian stores were acquired by Rona.  Also, the product was made in West Germany, a political entity which ended in 1990. Initially, I removed the rasp and put it with my die grinder bits and was going to put the package into the recycling bin when I thought, "Credo," "Omark," who the heck are they?

In the fall of 1946, a logger named Joseph Buford Cox was chopping firewood when he happened to take notice of a timber beetle larva that was happily chewing both with and across the grain.  The ease with which it did so fascinated him.  Since cutting chains of that period were poorly designed and required a lot of filing, he went home to try to duplicate the insect's C-shaped jaws on a chain, and the result was revolutionary--the Cox Chipper Chain. A year later, he founded the Oregon Saw Chain Manufacturing Company out of Portland to make the product.  A year after that, John Gray came on board, bringing with him his post-graduate degree from the Harvard University School of Business.  The company expanded rapidly, and became multi-national when it acquired the Planer Chain Ltd. company of Guelph, Ontario in 1952. (At that time, Guelph also boasted its own chainsaw manufacturer, Hornet Industries Ltd., which operated from 1945 to 1950, when it was bought by the Mall Tools Co.) Cox sold out to John Gray in 1953 and in 1957 the company was renamed Omark Industries. In 1959, the company began offering guard links on its chain, initially to reduce the grabbing of small brush.  However, the chain drastically reduced kickback accidents and its sales took off. In the mid-60's, Omark built a new factory in Guelph, Ontario.

In 1981, the company president toured the Nippondenso plant in Japan, which made starter motors for Toyota, and returned to Omark with Japanese manufacturing policies such as Just-in-Time (which became the company's Zero Inventory Production System, or ZIPS).

Enter Blount, Inc., which at the time was a construction company headquartered in Montgomery, Alabama. Its founder was Winton M. (Red) Blount, who started his career as a construction contractor and grew a successful business through world-class construction projects.  In 1983, Red went to Japan to learn how successful manufacturing companies operated. He happened to ask a Japanese expert which American company had most successfully adopted Japanese manufacturing techniques. The answer was Omark Industries of Portland, Oregon. No fool, Blount purchased Omark in 1985. Exiting the construction business in 1993, Blount, Inc. was renamed Blount International, Inc. and turned its focus exclusively to manufacturing. Almost overnight, Blount went from a worldwide construction company to a worldwide manufacturing company. In August, 1999, Blount merged with an affiliate of Lehman Brothers Merchant Banking Partners, the 88th largest U.S. company on the Fortune 500 list. In 2002, Blount’s corporate headquarters moved from Montgomery, Alabama to Portland, Oregon. Today, Blount Inc. is the world's leading manufacturer and marketer of cutting chain, guide bars, and chain drive sprockets for chain saws. In 2015, it was acquired by two private equity firms, American Securities and P2 Capital Partners.

As for Credo, it seems that it was a division of Omark that produced various cutting tools, such as split-point drills, and also acted as a distributor for products made in other countries like Germany.  I don't know if was an independent company before being bought by Omark.  In any event, after Blount bought Omark, in 1987 the Credo division was sold to Vermont American.

As for the original founder, Joseph Cox, he and his wife had no children.  Mrs. Alice Erikson Cox left her $6 million fortune to be used by the Willmar Community Area Foundation on behalf of the people of Kandyohi County and Lake Lillian in central Minnesota. Mrs. Cox had been raised in that community and said that she lived her life by a simple maxim: "Your attitude of gratitude is the very, very most important thing." 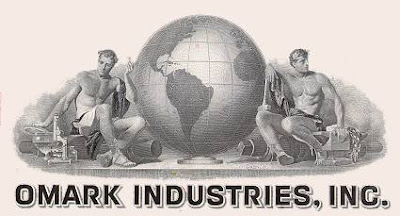 I have old Omark guard tool in good shape with accessories,but I'm not sure if it has any value??