Another old bicycle-type wrench from my scrap heap. It's apparently for a spray gun. Scratch the surface, and stories emerge!

Alfred Bullows & Sons, Ltd. in Long Street, Walsall, started out in the buckle manufacturing business.  This goes back more than several centuries when buckles had price of place on footwear.  In 1792, shoe-strings began to overtake buckles, and this sent the buckle-makers into a tizzy.  A deputation of buckle makers was gathered, an audience with the Prince of Wales (afterwards King George IV) was arranged, and the argument was put before him that "if the stagnation of trade caused by the patronage of shoe-strings and slippers continued, miseries, emigrations, and other horrible consequences must inevitably ensue."  The Prince was moved and ordered his court to forego the use of shoe-strings so as not to offend him.  This bought the industry some time, but by 1812 fashion was finished with the buckle. Although doom and gloom was forecast, in fact the industry found new markets and continued to prosper.  (Bullows ads below from Grace's Guide.)

As the century rolled by, at some point the company went from buckles to air compressors and paint sprayers!  How they managed this remarkable transition, I can find no clue, so I'll put it down to plain old Limey ingenuity.

By the late 1950's, the company had entered into agreements to distribute products from the Binks Manufacturing Company.  (I found the image of the wrench below on ebay.  It's stamped Binks Mfg. Co. and looks very close to the Bullows one above.) 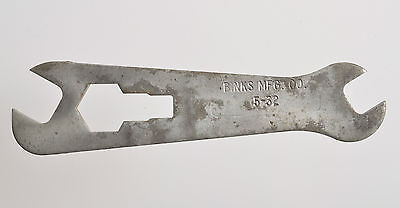 (At the same time, Bullows signed a similar agreement to sell Graco products from the Gray Company of Minneapolis, Minnesota. which had been founded in 1926.  At that time, Russell Gray was a parking lot attendant and somehow turned his thoughts to car lubrication.  Greases of those days became hard when the temperature dropped below freezing, making it impossible to use hand-operated grease guns.  He devised a grease gun that operated on air pressure which was favourably received by service stations, so Russell and his brother Leil formed the Gray Company to manufacture the new grease gun.  In 1957, the company developed the airless spray gun, moving it into a leadership position in the spray coating and painting market.  The firm went public in 1969, changing the company name to Graco.)

Back to Bullows and Binks.  Towards the end of the 19th century, Joseph Binks was a maintenance supervisor at Marshall Field & Co. in Chicago. 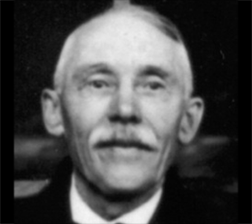 The department store had extensive basements, which were regularly whitewashed by hand brushing.  Binks thought he could find a better solution and in 1887 he came up with the first cold-water paint spraying machine.  On the strength of this success, he founded The Star Brass Works in 1890.  Three years later, the Columbian Exposition was to be opened in Chicago but just before this was to occur, nine of the ten exhibit buildings were unpainted. The hand painters were overwhelmed, so Binks swooped in and saved the day with his paint sprayer.  When the Exposition opened, every building was covered with a clean coat of whitewash, leading journalists to call it "The White City."  In 1911, the company moved into a larger facility and changed its name to the Binks Spray Equipment Company.  The company introduced the first hand spray gun.  When adopted by the car manufacturers, the new tool reduced paint finishing times from 30 days to 8 days. Following the First World War, DuPont found a new use for gun cotton: nitroceullulose laquer.  This type of fast-drying paint couldn't be effectively brush painted, but the Binks spray guns applied it easily, further reducing auto painting times to 3 days.  In 1929, the company became the Binks Manufacturing Company. The company was able to weather the great depression, and in 1934 expanded to Canada, opening a subsidiary in Toronto.

Bullows was ultimately bought by Binks, become a wholly-owned subsidiary in the 1960's.

Binks was bought by the Illinois Tool Works (ITW) in 1998, at which point they had all but shut down their Toronto facility.  In an interesting legal piece titled "The Dad's and Don'ts of the Workplace", the Canadian Binks Company received some notoriety:


Graco bought Binks from ITW in 2012 where it joined DeVilbiss, Ransburg and BGK. Graco (and Binks) were subsequently acquired by Carlisle Companies Inc. of Charlotte, N.C. in 2015, becoming Carlisle Fluid Technologies.

The Bullows name is still around in the U.K., but in a remarkably awkward and obtuse "History" paragraph they state, "Since the inception in the year 1963, we are committed to leveraging leading global technology to upgrade the process of our customer to next level." Is this a bad English translation from another language? Anyway, among their "associates" they list Binks, Devilbiss and ITW, so their present corporate ownership is clear as mud.

For an interesting history of spray guns, go to http://www.bodyshopbusiness.com/the-history-of-sprayguns/

I am a professional writer currently writing a true life history for someone who lived in Walsall at the time of WW2. I am trying to find some information about Alfred Bullows & Sons Ltd making hand grenades but there isn't anything available.
Can anyone help, please?
thank you
Maggie

Sorry, all the info I have is in the post.

My father worked for this company in the 1950,s early 1960,s.
He was a sales rep for them , Bullows had an office in Bridge St , just off Deansgate Manchester .It was just up the road from George Best,s boutique ! I used to travel around the north with him during my holidays and he would visit various factories that were still painting everything from tractors to children's rubber balls , by hand ! His job was to persuade the owners to convert to spray guns .He was probably putting folk out of work! If a company has a broken piece of equipment my father would rather try and repair it than sell them a new model , so he wasn't a very good salesman from that pointnof view . He must have been on a good wage as my sisters and I had private education .
I have one thing to thank Bullows for and that as long as I can remember we had a car ...all through the 50's and early 60's ! Every two years we would travel down to Walsall were my dad would be presented with a new car ! Manchester was a dirty city then but he was able to take us out around Derbyshire ,Cheshire and regular trips to Cornwall in the Bullows car !
He was made reduntant some time in the early sixties and got a new job with Air Industrial Developments . I have vividness memories of people painting all a companies products by hand .Its hard to believe that this ever happened now .
The good old days ..Mike Ramsay e. mdramsay@yahoo.co.uk

Thanks for your story and insights into the company. Much appreciated. Truly different times.

It is probably far too late, but perhaps I can help with some background on the Bullows business in it's earlier days.

Never too late! I'm always looking for information on these old companies. I can be reached at gerald@vanwyngaarden.ca