This is a lovely clamp-style saw with an adjustable frame.  Sadly, for such a well-made tool, the manufacturer did not see fit to leave its name on it.

Below, another made by Dixon, apparently a German firm:

The jeweller's saw is in the class of coping saws. The history of the coping saw seems to be something of a mystery.  In the 19th century, there were marquetry saws with deep throats and frame saws with shallow throats used for cutting dense materials. The coping saw appears to be a tool that bridges these two forms. The first U.S. patent for a saw that looks like a modern coping saw is an 1883 application from William Jones for a “saw frame for a jeweler’s saw.”  The following year, C.A. Fenner patented a mechanism that allowed the blade to rotate in the frame (it's amazing in its gizmosity). He called it (most unhelpfully) a "hand saw."  In 1887,  Christopher Morrow patented a tool called a "coping saw," which ironically tensions its blade more like a wooden bowsaw.  After that point, the term "coping saw" crops up regularly in catalogues and patent filings. By 1900, the saw is everywhere. 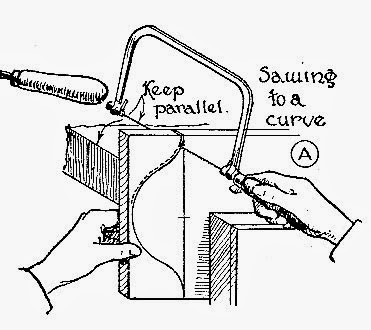