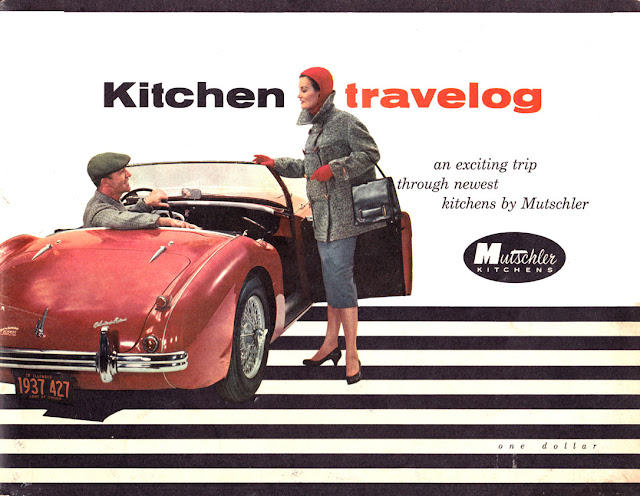 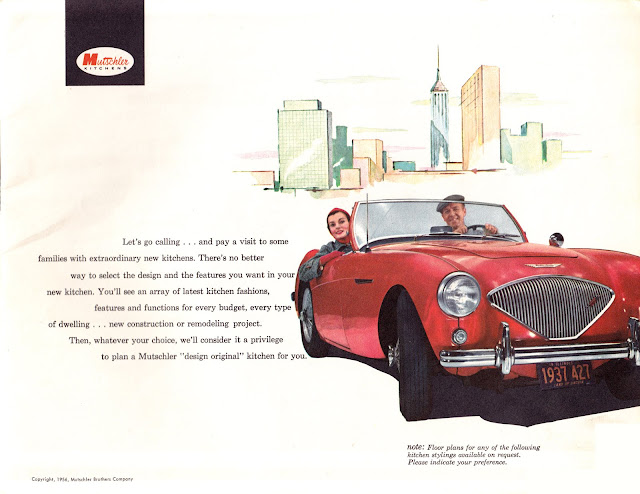 A sample of the 20 kitchen designs featured in the brochure: 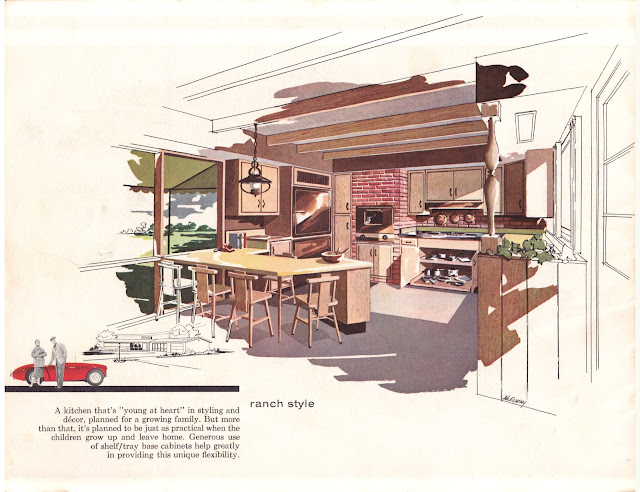 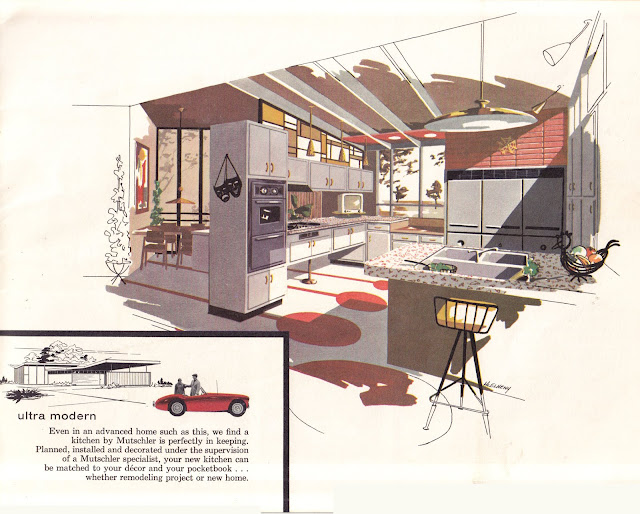 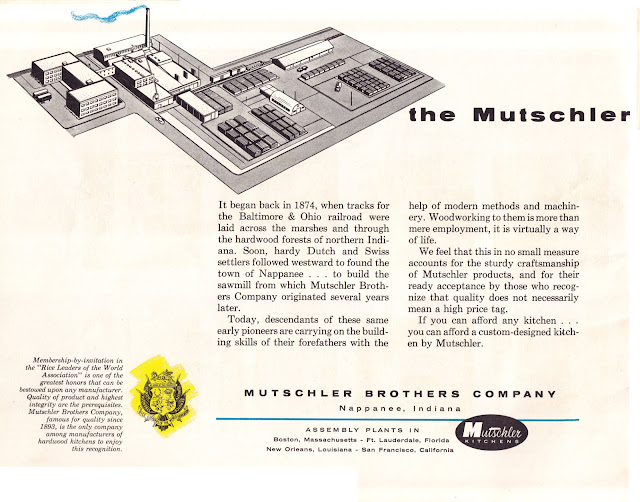 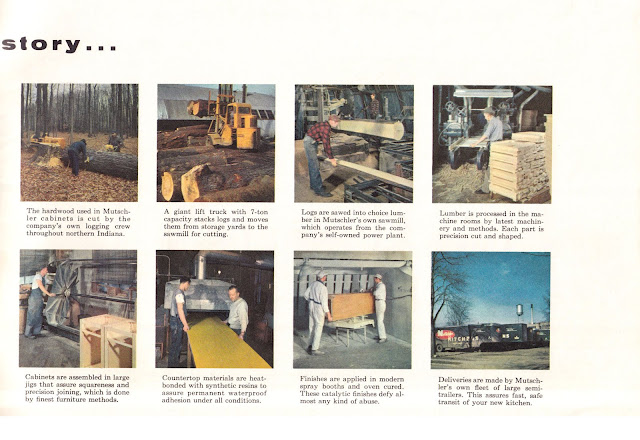 The brothers Albert and Charles Mutschler started out working for the Nappanee Furniture Company around 1891, which they purchased in 1902.  Initially awkardly named the Coppes, Zook & Mutschler Company, Inc.  In 1913, the partnership was amicably dissolved the Mutschler Brothers went their own way.  The company pioneered the use of porcelain-enamel on surfaces and "Porta-Bilt" cabinets which customers could install and also remove and take with them if they moved.  After World War II, Mutschler Kitchens were marketed exclusively through specialty retailers. The rise of steel kitchen cabinets in the 1950's began to eat into their market, which was increasingly dominated by the steel companies in Youngstown, Ohio.  In the 1960's, Mutschler responded by hiring furniture designer Paul McCobb who worked with aluminum extrusions, although this "Eurostyle" designs proved ahead of their time. The firm remained in the family until it was sold in 1969 to American Standard, then was absorbed into Triangle Pacific in 1974.  The Nappanee plant stopped making cabinets in 1987, but continued to produce door and drawer fronts until 1993.  Then it was all over.

As an interesting sidebar, the brochure features the following: 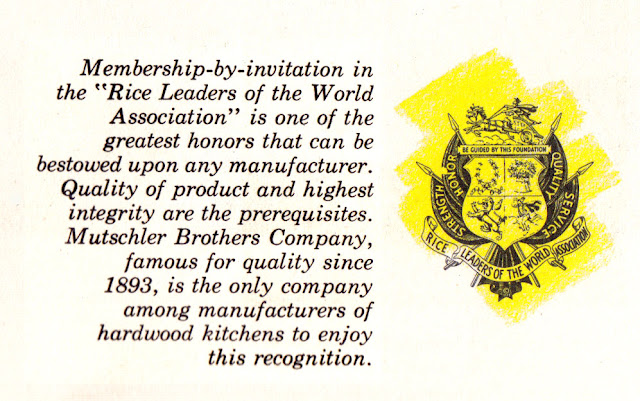 This association was founded by Elwood E. Rice (1879-1958) "to immortalize the character and the achievements of great men who have built and are building the prestige of our country, as an inspiration and incentive to present and future generations." Judging from the 1914 ad below, it attracted some impressive organizations to its ranks.  Rice's tombstone in Ohio is engraved with the four symbols in the crest above.  Apparently, somewhere along the way, his emphases on strength, honour, quality and service fell out of favour with the corporate world. 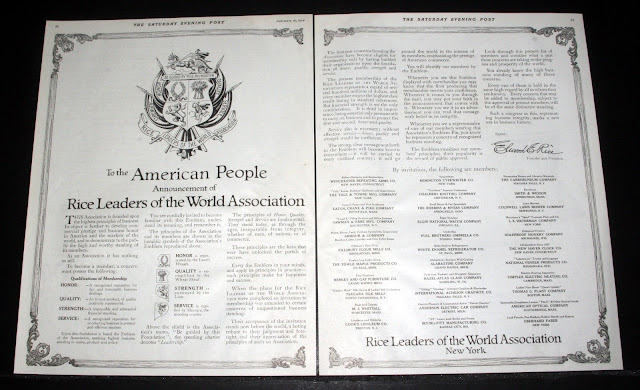 the life after said...

Wow!!! I have Mutschler cabinets in the home I purchased in 1993. I think these may be either original to the home (1962). Because of the moulding that was used on the cabinet fronts I am assuming these were not installed as part of a late 1980s update.

These cabinets were actually one of the reasons why I purchased this home. They are all wood cabinets with dovetail joinery on the drawers and adjustable sliding metal shelves in the base cabinets.

The drawers and cabinets all indicate "fruitwood" on the interiors so I am not sure what type of wood was used. Cherry maybe? But these cabinets have withstood the test of time and continue to be workhorses for me.

My only issue is a couple of drawers are now sagging and I am trying to figure out how to repair. But other than that very good cabinetry.

Interesting history. I have Mutschler Nappane wooden cabinets in my house purchased in 1982. I understand that the kitchen was expanded & remodelled in the 1960's or '70's, when I predume the cabinets were installed.

I love these cabinets! They are sturdy, with only two repars needed over the years: one linen drawer fell apart from use and was fixed with metal corner braces, and a mesh fronted produce cabinet door needed to be reassembled. So many specialty cabinets were installed. The only drawback right now is finish wear around the knobs of often used cabinets, and the knobs need to be replaced -but beyond my budget with 54 knobs! Yeah - lots of cabinetry.