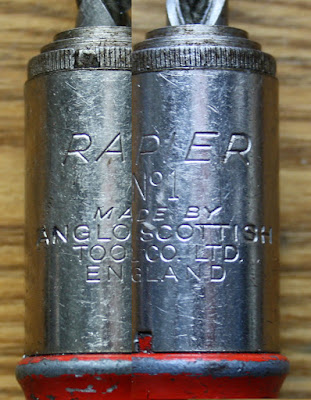 Above, a "Rapier" No. 1 Archimedes screwdriver made by this company.

The Anglo Scottish Tool Company was located in Gateshead, U.K., across the Tyne River from Newcastle-on-Tyne. They were best know for their line of "Rapier" metal planes and spokeshaves. From what I can find online, their planes were of indifferent quality.   The driving force behind the company seems to have been one William Sidney Powel, to whom a number of British manufacturing patents were issued starting in the 1930's and assigned initially to the Powel & Hill Company, which became the Anglo Scottish Tool Company. In about 1946 the company apparently became Adams Powel Equipment Ltd.  Under that name the company persisted into the early 1970's, when they were honoured with a Queen's Award to Industry for their export achievement.

The company's name is peculiar, since its location was a good 60 miles from the Scottish border.  I don't think the name would play well today against the strong sense of Scottish independence.

During its heyday, the company's tools were distributed in England and Scotland through H. & D. Churchill Ltd. of London. 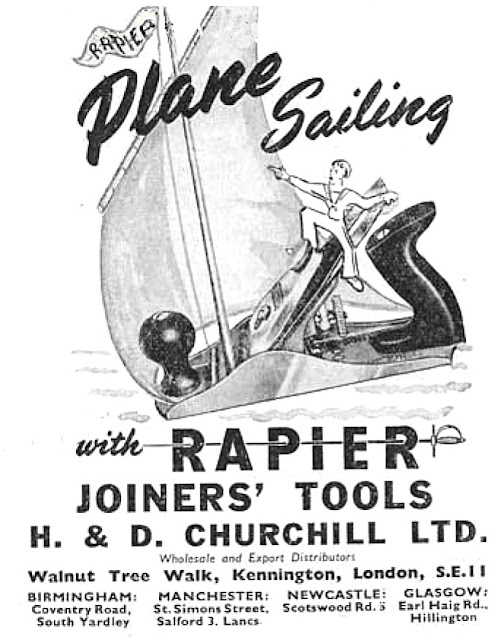 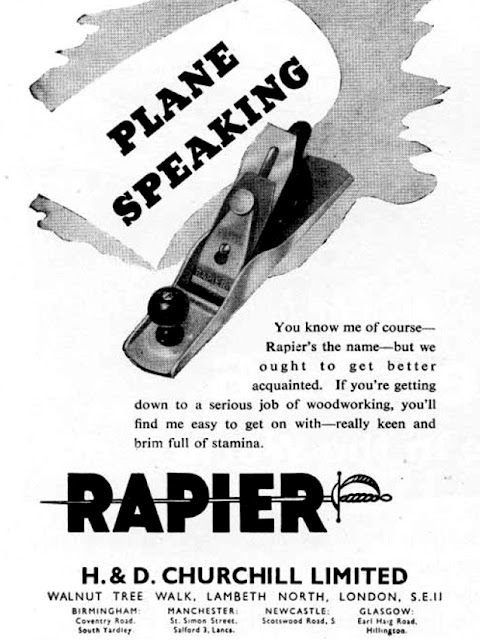 I have a Rapier No 3. Screwdriver. It's about 49cm long. Works perfect. All the finish is intact and kept safe from rust with Mothers metal wax

I have a Rapier double block plane exactly as a Stanley #130. Beautiful addition to my collection...well made, fits nicely in the hand and holds an edge even after doing oak, walnut or hard maple.

I inherited a Rapier archimedes screwdriver/drill from my dad several years ago. He thought at the time that someone gave it to him when he was a young minister in the backwoods of Yarmouth NS, or upper Saint John River (NB, both Canada). Anyway, if he ever had any bits for it, they are long gone; the only bit is a very small drill bit, maybe 1/16" 1/32" in diameter. But I have never found any other bits that will fit. The guys at Lee Valley Tools were quite interested in it, but they only had Stanley bits, which were "backward" or something like that. Does anybody know where I could find more, new or used?

can you send a picture of the bit you have? gerald@vanwyngaarden.ca Thanks!