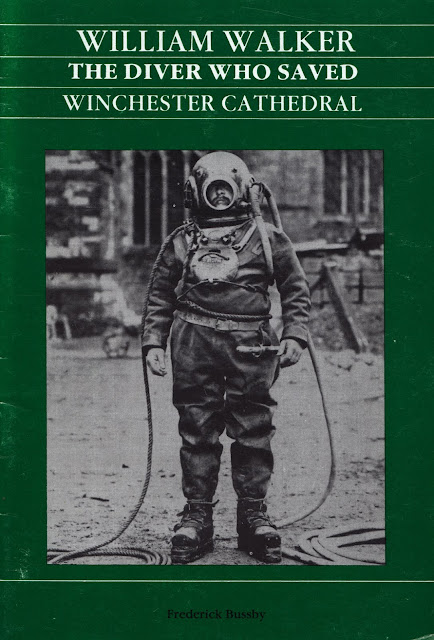 I found this fascinating booklet at a Brockville thrift shop some time ago.  First published in 1970, this was the 1987 Third Edition produced by The Friends of Winchester Cathedral.

In 1905, an architect reported that the west end of the cathedral, in the crypt, was leaning outward dangerously.  This was a thirteenth-century addition to the original Anglo-Norman structure, and the later builders had created a timber raft under the foundations to spread the load.  A good idea in theory, but unfortunately it floated on a thick peat bed.  This had slowly compressed over the centuries, allowing the building to shift away from the main structure.  Under the peat, however, was a bed of hard gravel, which would provide a solid foundation.  The problem was that the gravel bed was fifteen feet below the level of the water table. Francis Fox, a consultant engineer made a number of recommendations, including the grouting of the walls to be achieved by pumping liquid cement into the loose rubble core. About 500 tons of this grout was used. 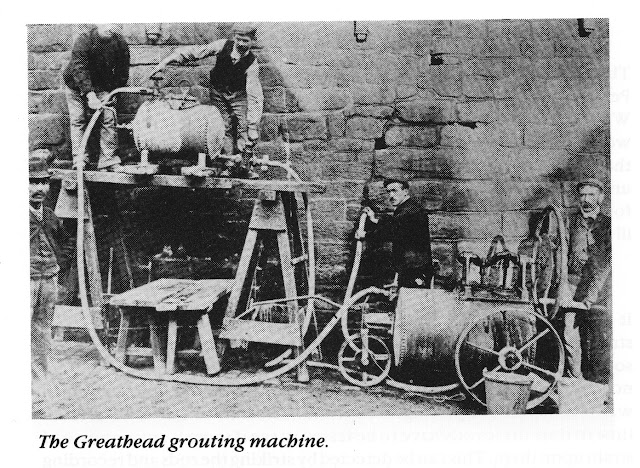 Fox  also recommended underpinning the walls down to the hard gravel.  To do this, the original beech logs were sawn out by hand. Surprisingly, they were perfectly preserved.  Digging down through the peat proved much more difficult, since the water rushed in and filled the excavation area to a depth of 13 feet.  Powerful pumps could not keep up with the flow, to which was added the concern that the pumps might actually start sucking out solid material from beneath the walls, leading to their collapse.  In 1906, Fox got the idea to use a diver to do the work.  William Walker was chosen for the job.  Born in London in 1869, entering the Royal Navy and becoming a fully qualified diver.  In 1892 he left the navy to join the famous firm of Siebe Gorman & Company, becoming their chief diver out of an international staff of more than 200 divers.

Between 1906 and 1911, Walker worked in 13 feet of black, soupy peat water, made even more vile by the fact that it also irrigated the crypt.  Over five years, he handled 25,800 bags of concrete and 114,900 concrete blocks, building them up from the gravel bed to the bottom of the cathedral's stone foundations.  In those days, the diver's suit weighed 200 pounds, including 18 pounds for each boot. He also wore 40 pound lead weights on his chest and back.  On top of that was his 30 pound helmet.  Although buoyancy in the water helped compensate for some of this weight, it was still extremely burdensome, especially realizing that Walker was 37 years old at the time the work began. 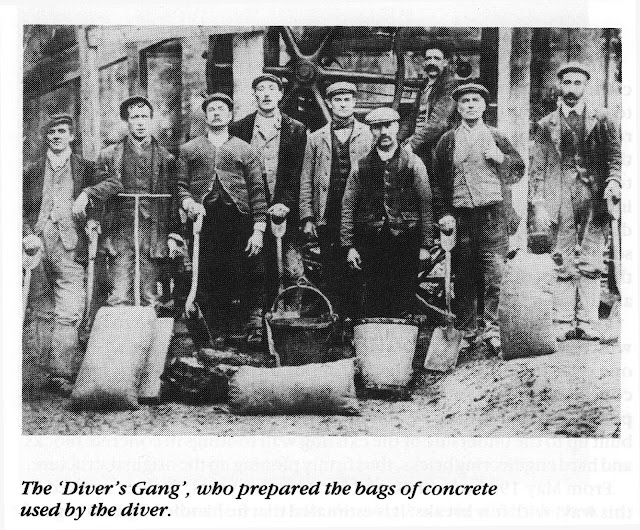 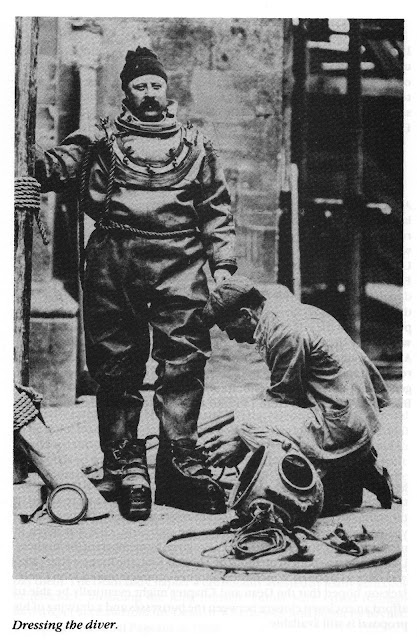 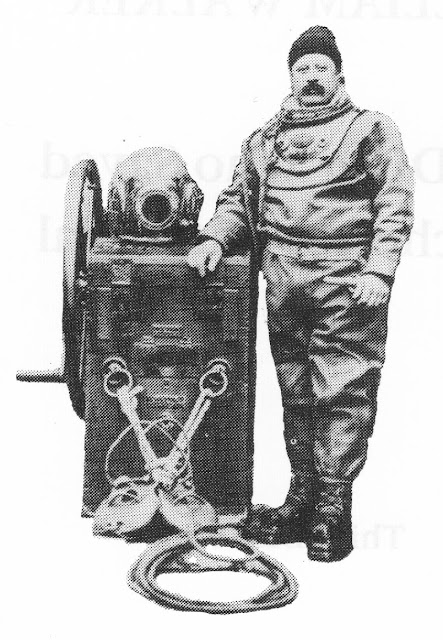 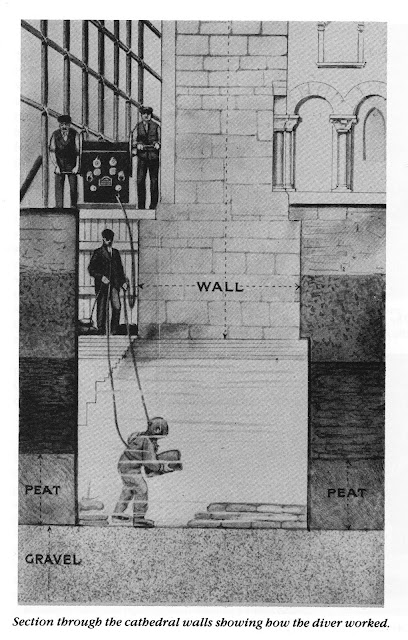 When the work was completed in August 1911, the cathedral presented Walker with an inscribed silver rose bowl.  Walker was very honoured by the gift, but more was to come.  In 1912, Walker was summoned to Buckingham Palace to receive the Royal Victorian Order, an honour under the exclusive control of the King. Walker wrote to his employers:

"I have received a letter commanding me to be at Buckingham Palace on the 19th to receive the Royal Victorian Order at the request of His Majesty.  I would be grateful if you would inform me how to go on and anything I could do for the firm, and I must thank you with all my heart for all you have done for me in the past."

Naturally, the firm was all too pleased to permit him time off to attend the ceremony and in due course he was presented with the order by King George V, who shook his hand and thanked him for his work in saving the cathedral.

Tragically, William Walker succumbed to influenza in the terrible epidemic of 1918.  In 1964, a statuette in Walker's honour was commissioned.  Sir Charles Wheeler was given the task and, when the statuette was unveiled, it was revealed to be that of Francis Fox in a diving suit.  The two men couldn't have been more different in appearance:  Walker was burley, 14-stone and moustached, while Fox was slight and clean shaven.  It was believed that the Sir Wheeler may have based the sculpture on the wrong figure from a group photograph!  Duh!

It wasn't until 2001 that this error was corrected and a new statue bearing Walker's likeness was installed at the cathedral.  An article in The Telegraph had this to say:

The Dean of Winchester, the Very Rev Michael Till, said: "There has been embarrassed recognition that the attempt to honour Walker turned into a bit of a disaster, but the story is too good to leave like that and now it has come right.

Very Rev Till said: "We don't tend to draw attention to the error in the statue, but there is a lot of attention drawn to Walker. Without him we would be looking at a rather shorter cathedral. We would still have the longest nave in Europe but the sanctuary would be the shortest." The new 15-inch bronze statue, which is costing £9,000, has been created by Glynn Williams, the Professor of Sculpture at the Royal College of Art.

Reg Vallintine, the vice-chairman of the Historical Diving Society, which was behind the initiative to erect the new statue, said: "It was awful for the families when the first statue was unveiled. There, instead of the features of Walker, was the pointed face of the surveyor. It wasn't the cathedral's fault, though, and we are delighted that it is doing this. It is time to right this wrong." 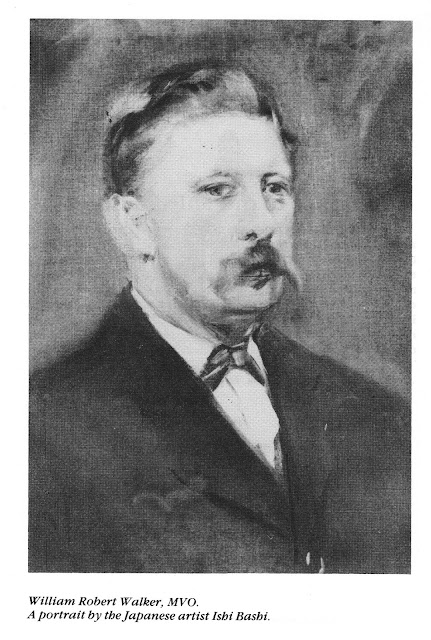 Hi there, does your book say when in 1918 William Walker died? I run a theatre company in Winchester and want to explore his story. I'd like to tie it in with the centenary of his death. Can you reply to theatre@blueappletheatre.com please!?
thanks
richard conlon