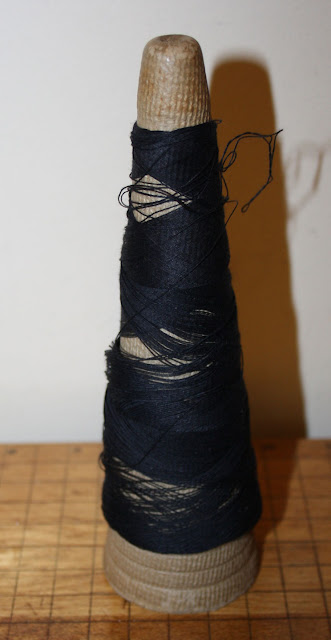 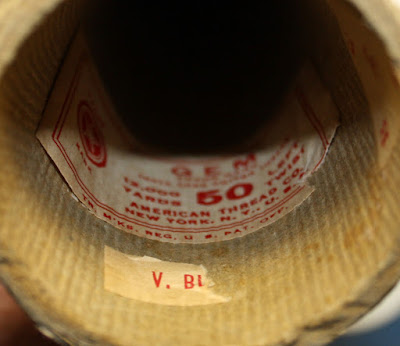 Above, an old spool of thread I found at a thrift store.  The label inside reads "G.E.M., American Thread Co."

The American Thread Company (ATCO) was founded in 1898 by the merger of 18 thread and yarn manufacturing companies.  In 1892 the Merrick Thread Company, one of the original firms, produced 69,500,000 spools.  Spools were made of white birch, and every year 3000 cords of this wood were required, providing full-time employment for 60 men.  A further 700,000 feet of lumber was needed to make shipping boxes for the spools.  The company eventually exhausted the local supply of birch and had to relocate to the town of Milo.  By the time of the First World War, the demand had increased to 20,000 cords of birch annually.  ATCO made 4600 kinds of thread, and probably 1000 kinds of spools. Over the 70 plus years of ATCO's production, it probably made 3,600,000,000 spools and bobbins. The spools were made to exacting standards--they couldn't vary in diameter by even the thickness of a thread.  As a result, there was a tremendous amount of waste in the birch logs used to produce them.  The company burned much of this in its own furnaces to produce energy for the steam engines.  Employees were also able to take wood waste home, and just about everyone had a wood stove for this purpose. This state of affairs continued until the 1950's when electric energy eventually took over.  Beginning in the 1960's, almost all of the gigantic New England textile mills closed their doors.  The American Thread Company closed its Willimantic Mills plant in 1985, shifting operations to North Carolina and eventually to Mexico.  The historic American Thread Building in Manhattan is now a condo.

For pictures of the mills during their heyday, visit the Museum of Connecticut History.  For a brief but fascinating history of the company, read The Rise and Fall of Connecticut’s Textile Industry.
Posted by The Duke at 9:17 AM