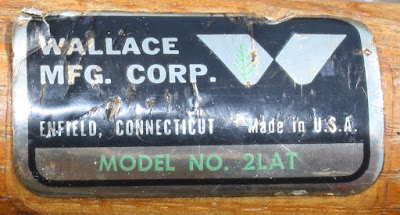 Images of my two pairs of Wallace "Power-Lever" pruning shears.

I love these things--they are so much more efficient and effective than my conventional pruners.  I had first acquired the metal-handled ones, so when I found the wooden handled ones at a recent yard sale, I snapped them up.  (They also carried a sticker which identified the maker.)  Below, how the jaws operate, creating a much wider opening between them than is available in conventional pruners.  The U.S. patent for the compound leverage shears was granted to Edward M. Wallace and Wallace M. Preston in 1965. 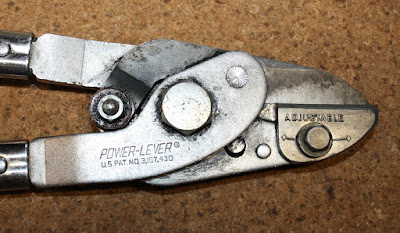 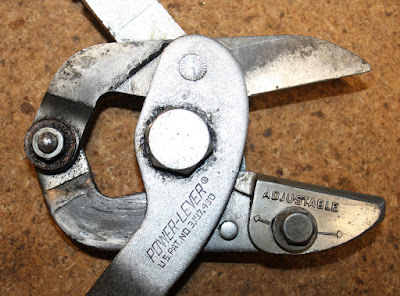 Edward Morris Wallace received both his Bachelor's (1940) and Master of Science (1941) degrees from M.I.T.  He took a position as a metallurgist for Ulster Knife in Ellenville, New York from 1941 to 1847, then became an engineer with Imperial Knife in Union, New Jersey until 1949, at which point he started the Wallace Manufacturing Corporation.  This company appears to have specialized in the manufacture of garden shears and stayed in business until 1986.

As an aside, the Ulster Knife Company and the Imperial Knife Company were merged in 1941, so it would seem that Mr. Wallace actually remained within the same organization prior to starting his own company.  The Schrade Cultery Company was acquired in 1946, becoming part of the Imperial Knife Associated Companies group, and in 1985 the entire company was renamed the Imperial Schrade Corporation.  In 2004, the company's centenary, the Ellenville factory was closed and the Schrade name was purchased by Taylor Brands LLC, which continues to use it as a brand.  Taylor Brands was itself acquired by the Smith and Wesson Holding Corporation in 2016.

To see a 1961 catalogue from the Ulster Knife Company, click here.
Posted by The Duke at 8:21 AM

I am looking for the replacement part for my hedge trimmer‘s and I believeThe part is XLT24, or could be XL124. My email address is lowercase paulamartin37@yahoo.com. My phone number is 817-915-1494.
Thank you, Paula Martin

I have acquired a nice pair of Wallace mfg.hand loppers. Model number is LP25. Can anyone help me to find out when these were made

I have a wooden handle Wallace lopper with the patent number ending in 478. It seems to be model 2LAT as near as I can tell. I need a new anvil and a new cutting blade. Do you know where I can get these? Or maybe it's better to buy a new tool. I'm not a collector - just have to get something that works. Thanks for any help.
Richard

I have not been able to find a source for parts. Hopefully someone has had better luck and will share the info!

Decided to ask at a sharpening service and was told the lopper is able to be rehabed. No further issues, we'll see the outcome on Tuesday.

Looking for a saw blade for a Wallace TP-45. dingmn@yahoo.com

We need a replacement part (adjustable anvil) for Wallace Power lever model Number 2 LAT. Can anyone tell us where to order this?
Thanks!
charlannerussell1960@gmail.com

Just shined up a Wallace XLT24 lopper acquired at a garage sale in Maryland. This is a simpler model, metal handles (bowing from too much use) but still a good blade.

I found this 2LAT at a yard sale "after-sale/give away" and use them now for a good 12 to 15 years they are great. no one is making anything like this anymore. I think I'll have to throw them away after they give up on me because I've looked for a source of the parts ahead of time since they are pretty old, and I could not find any. I am happy as they are still going.