When Boeing introduced the 247 in 1933 as a larger 14 passenger airlines, a preliminary design review by airline pilots did not go well, the pilots thought there weren't enough airports with long enough runways, that the engines made too much power and unanimously recommended it be reduced in size. It was reluctantly redesigned as a smaller craft with a capacity of 10 passengers. The aircraft shown is an early model with the forward sloped windshield, designed to eliminate the glare from the instruments. However, it instead reflected the glare from outside lights making landing and taxiing at night difficult.

It was an advanced airplane, faster than the top of the one US fighter planes but when the 21 passenger Douglas DC3 appeared two years later, the 247 was obsolete.  With this many passengers, the flight could be profitable on passenger fares alone, no need to carry additional freight, mail, etc. Only 75 247s were built. 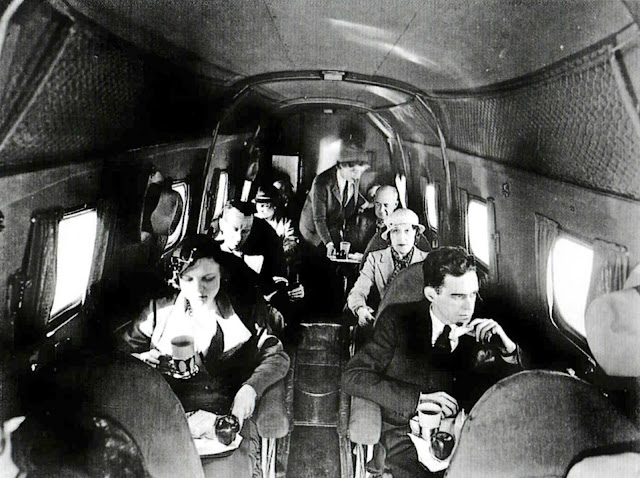 It even looks like a plane that was born to lose. A sad, slope-shouldered airplane in a cloth cap.

The passengers in image 2 are aware of this, or so it looks to me. Not a smile among them. Not a one will meet the photographer's lens. Not one can work up a smile for the camera. I bet they debarked in haste, pushing and shoving, at the first opportunity.

The most advanced aircraft of its day the revolutionary Boeing Model 247, developed in 1933, was an all-metal, twin-engine airplane and the first modern passenger airliner. The Model 247 ushered in the age of speed, reliability, safety and comfort in air travel. One is exhibited in the National Air and Space Museum, Washington, D.C.

I call BS. When did pilots ever say "the engines made too much power"?

Note the main spar(with steps) in centre of aisle.
Pity the stewardess.

Don, when there is not enough rudder authority to overcome yaw produced by too much engine thrust. A problem in many twin engine aircraft.

Pessimist: These engines have too much power!

Optimist: All we need is a bigger rudder!