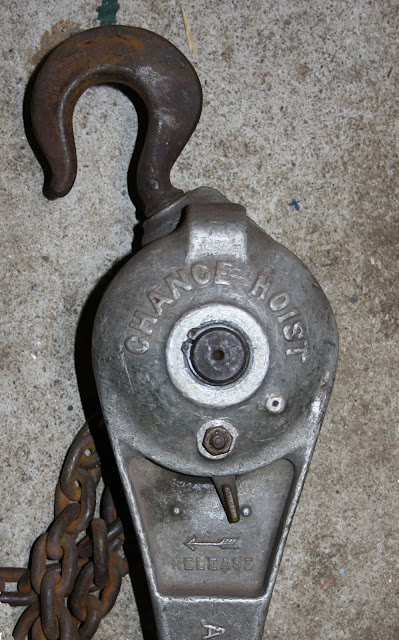 My Chance ratchet-lever hoist.  Unlike come-a-longs, this type of tool is rated for overhead lifting.  It's still available today, as is the Chance Hoist Instruction Manual.

Albert Bishop Chance, "The Centralia Wizard", founded his company in Centralia, Missouri in 1907. He and his father owned the Centralia telephone exchange, which they operated and maintained.  Bishop Chance set up a small workshop in a former church and began to produce about 15 telephone items which he had invented.

Business was slow.  One raw winter night in 1912, a storm iced many of the poles, which were tilted in all directions.  The usual method for straightening them would have been to dig pits to hold the large "deadman" anchors, a very slow process even in earth that wasn't frozen.  Instead, Chance came up with his own idea, the first earth anchor:

Chance moved to eliminate the bottleneck of pit-digging altogether. Instead, with an auger, he bored a small-diameter hole, slanting it at about a 45-degree angle. Then he drove a rod fitted with a removable spear-shaped head through the ground, angling it at right angles to the hole so that its end projected into the side of the hole. The spear point was removed by hand, and a deadman-type log with a hole through the center was slipped length-wise into the hole in the ground and hung on the end of the rod. A nut with washer was screwed onto the end of the rod, where the spear point had been to hold the log fast.

This new, time-cutting anchoring technique saved the telephone lines. And from it, A. B. Chance developed the Never-Creep anchor. It was this necessity-born anchor idea that was to bring the A. B. Chance Company is first widespread recognition. 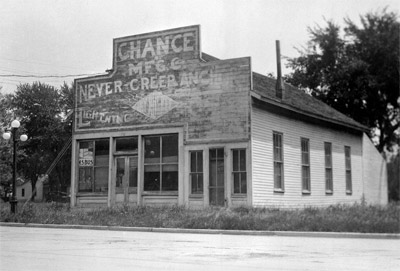 This product put the company on the way to immense success, and is honoured today in Centralia's annual Anchor Festival.

A.B. Chance Industries, Inc. went on to become the largest manufacturer in Boone County, first making products like Model T piston rings, cast iron pans, cast aluminum playground equipment and porcelain insulators, eventually specializing in products for electric and communications companies.  The founder looked after his workers: during the Great Depression, he borrowed heavily from his private life insurance policy to keep most of his employees on the payroll. The company also required that all of its senior management live in Centralia. The company's products were used in several famous events, including Admiral Byrd's second Antarctic Expedition in 1933-1935 and in 1973 when Chance cutters were modified to help Sky Lab II, when its solar panels refused to open. The founder passed away in 1949, and left Chance Gardens as a gift to the community.  His company and achievements are also commemorated in the Chance Room of the Centralia Historical Society Museum.

In 1968 Bishop Chance's son, F. Gano Chane, wrote The Ideas that Guide Us: The Story of A. B. Chance Company, Centralia, Missouri (Newcomen Society in North America). (The  American Newcomen Society foundered in 2007, after 85 years.  Their motto was "Actorum memores simul affectamus agenda." ("We look back but go forward.")  Progress is fine...

A.B. Chance was bought by the Emerson Electric Company in 1975, and then by Hubbell Power Systems in 1994.  (Hubbell was founded in 1888 in Bridgeport, Connecticut by Harvey Hubble II. Beginning with one product, a paper roll holder with a toothed blade for stores that carried wrapping paper, the 2-prong electric plug that we still use today, the lightbulb socket with an on/off pull chain and, in 1917, the toggle light switch to replace the two-button type.  In the 1920's,  Hubbell developed a device that locked streetlamp and household light bulbs firmly in place, filling a need in cities where new trolley cars were producing vibrations that loosened bulbs and caused them to fall out of their sockets.  So, Hubbell's not a bad place for the Chance company to have ended up.)